MATT DOVEY OF LINCOLNSHIRE, UK AND ADRIAN MASSARO OF NEUQUEN, ARGENTINA NAMED GRAND PRIZE WINNERS OF THE 32ND ANNUAL L. RON HUBBARD ACHIEVEMENT AWARDS FOR WRITERS and ILLUSTRATORS OF THE FUTURE CONTESTS FOR SCIENCE FICTION and FANTASY IN LOS ANGELES ON APRIL 10, 2016 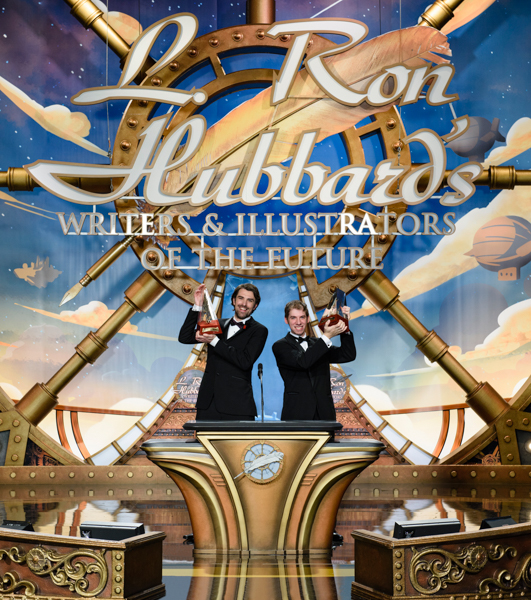 Los Angeles, CA (April 11, 2016) – MATT DOVEY, a writer from Lincolnshire, UK and ADRIAN MASSARO, an illustrator from Neuquen, Argentina were announced as the Grand Prize Winners of The 32nd Annual L. Ron Hubbard Achievement Awards for Writers and Illustrators of the Future Contests in Science Fiction and Fantasy held at the Wilshire Ebell Theatre in Los Angeles, CA, presented by Author Services, Inc. and Galaxy Press on Sunday evening, April 10, 2016.

Joni Labaqui, Director of Contests for Author Services, Inc. said, “This year’s packed awards show marks a historic moment in our contests 32-year history, in that it is the first time ever that the Grand Prize winning writer and Grand Prize winning illustrator won for both the story and illustration of the same story simultaneously.  Matt Dovey’s story, ‘Squalor and Sympathy’ was illustrated by artist Adrian Massaro.” 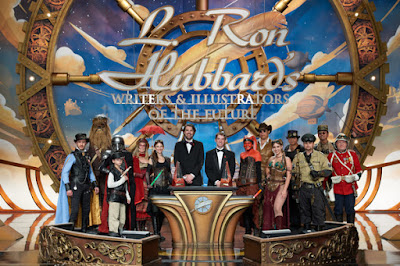 Matt Dovey said, “Moments like this are unique and life defining.  Write without shame.  Do what you do with confidence.  Ours is the greatest genre, that of science fiction and fantasy.  Don’t let anyone tell you otherwise.  Speculative fiction is what we tell our children.  If we are the writers of the future, it is up to us write the future.”

Adrian Massaro said, “I didn’t plan to win.  I was surrounded by equals in this contest.  All of the other stories that were so vivid; I never thought I would win.  I tried to put the emotion into my illustration for ‘Squalor and Sympathy.’  I find it difficult to find words to express the profound feelings I am experiencing at the moment.  It’s beyond words.”

Joni Labaqui, Director of Contests for Author Services, Inc. presented illustrator Sergey Poyarkov with the Inaugural L. Ron Hubbard Silver Star Award for his excellence as a science fiction and fantasy illustrator for the last 25 years.  Poyarkov won the Golden Pen Illustrator Grand Prize Award in the 2011 Writers and Illustrators of the Future Contests.  In his acceptance speech of this year’s first Silver Star Award he echoed what he said 25 years ago when he won the illustrator’s contest, which launched his career:  “Thank you America, thank you Los Angeles and thank you L. Ron Hubbard.”

John Goodwin, President and Publisher of Galaxy Press, which was emceed by
Gunhild Jacobs, Executive Director for Fiction Affairs at Author Services, Inc., unveiled the 32nd Volume of “L. Ron Hubbard Presents Writers of the Future” featuring the work of 24 award-winning new authors and illustrators from this year’s contests.  Edited by David Farland, with cover artwork by Sergey Poyarkov, the book also features stories written by renowned writers like Tim Powers, Sean Williams and Brandon Sanderson.

Kellie Gerardi, a Space Science Strategist and Media Specialist of the Commercial Spaceflight Federation, served as the Keynote Speaker.  Gerardi is one of 100 people globally currently being considered for space settlement to live on Mars.
Kellie Gerardi was presented with a Special Flag from Gunhild Jacobs on behalf of Author Services, Inc.  A USB chip was sew into the flag containing all the stories and illustrations from the latest 32nd edition of the book, “L. Ron Hubbard Presents Writers of the Future,” so that in the event she is chosen to live on Mars, she can take the flag with her to start a library and art gallery there.

In addition, a 13th writer, K.D. Julicher of Fernley, NV was selected as a Published Finalist for this year’s contest.  She was in attendance at the event.

Krystal Grell (Pen Name:  Krystal Claxton) of Brooklet, GA, a writer award winner from 2015 was also in attendance at this year’s awards show.

The Black Tie Optional/Steampunk Formal event was attended by 13 members of Star Wars Steampunk Universe as well as by celebrities like Catherine Bell, Jennifer Aspen, Jesse Kove, Jim Meskimen, Pepe Reyes, Irvin Rodriguez and The Winner Twins – Brianna and Brittany Winner.  The show was kicked off with a rousing Steampunk body percussion opening number.  The evening also included appearances by EMCirque, a Cyr wheel performance, a dancer/dinosaur puppeteer performance and an aerialist performance.

Following the 1982 release of his internationally acclaimed bestselling science fiction novel, “Battlefield Earth,” written in celebration of 50 years as a professional writer, L. Ron Hubbard created The Writers of the Future writing contest (www.writersofthefuture.com) in 1983 to provide a means for aspiring writers of speculative fiction to get that much-needed break.  Due to the success of the Writing Contest, the companion Illustrators of the Future Contest was created in 1988.

The intensive mentoring process has proven very successful.  The 368 past winners of the Writing Contest have published 1,050 novels and over 4,000 short stories.  They have produced 32 New York Times bestsellers and their works have sold over 50 million copies.  The 298 past winners of the Illustrating Contest have produced over 5,000 illustrations, 360 comic books, graced 623 books and albums with their art and visually contributed to 68 television shows and 46 major movies.

The Writers of the Future Award is the genre’s most prestigious award of its kind and has now become the largest, most successful and demonstrably most influential vehicle for budding creative talent in the world of contemporary fiction.  Since inception, the Writers and Illustrators of the Future contests have produced 31 anthology volumes and awarded a cumulative $930,000 in cash prizes and royalties.  Last year’s anthology, “L. Ron Hubbard Presents Writers of the Future – Volume 31” was recently selected by Publisher’s Weekly as a National Bestseller; in 2016 the volume received the Benjamin Franklin U.S. Award.  For more information please visit www.writersofthefuture.com and www.galaxypress.com.

Posted by johnalexwood at 01:19 No comments: