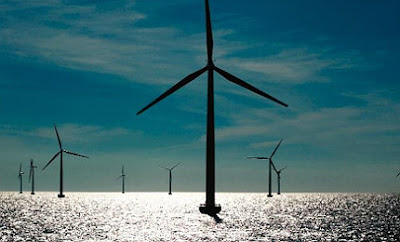 On 4th July 2013, Phase 1 of the London Array Offshore Wind Farm, comprising 175 wind turbines and 2 off-shore substations with a capacity of 630 megawatts, was officially inaugurated by the UK Prime Minister

The London Array is an offshore wind farm in the Thames Estuary in the United Kingdom. The project when completed will employ 341 turbines at a cost of around £3,000 million and will be the world's largest offshore wind farm.

Geodynamics, Australia's foremost Geothermal Energy developer estimates that the cost of building one Engineered Geothermal System (EGS) plant generating 50 megawatts, would be in the order of £75 million. If that estimate is accurate, then it would take 20 plants to deliver the 1,000 megawatts of phases 1 and 2, and at £75 million each, the total cost would be in the order of £1,500 million, much less than the £1.800 million estimate for the London Array for the same capacity.

Moreover, EGS plants deliver electricity continuously regardless of the wind (or of the sun) whereas the output of the London Array will depend entirely on the wind. No wind --- no output. And in very high wind conditions, wind turbines need to be shut down!


EGS plants require minimum maintenance. What will be the cost of maintaining hundreds of turbines located out at sea? Other than "high", no one knows.

Posted by johnalexwood at 21:42 No comments:

Labels: egs, geothermal energy, green energy, renewables, wind power
Newer Posts Older Posts Home
Subscribe to: Posts (Atom)
Love Alter Bridge, Nicky Hopkins, Spamalot, Terry Gilliam's "Brazil", Monty Python and I am BFI's Biggest Monty Python Fan. My stepfather invented the Kenwood Chef, my father liberated Bergen-Belsen Concentration Camp and my godfather was Jagaddipendra Narayan, the Maharajah of Cooch Behar. Went to Cranleigh School and the University of Surrey. Scientologist. Vegan. East Grinstead. This blog is about all of the above and more, but not necessarily in that order.