Nuclear Power: After Japan, what now? 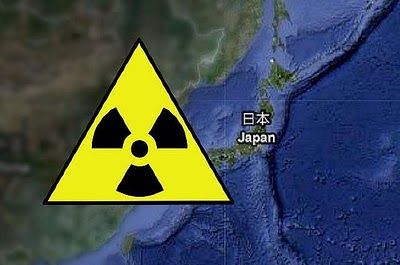 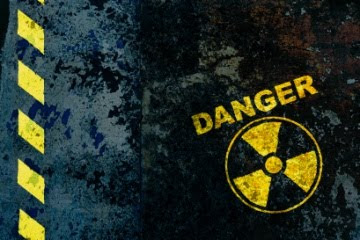 Extracts from the media following the disaster in Japan:
As I see it.....

by L. Berney
Nuclear Power: After Japan, what now? 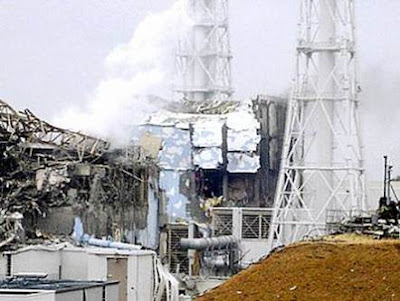 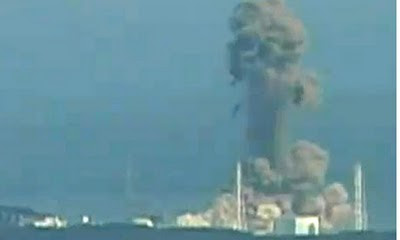 The nuclear catastrophe at Fukushima in Japan
There are 439 Nuclear Plants operating world-wide providing 6.3% of the world's energy.

The current nuclear catastrophe in Japan threatens to contaminate an entire nation with radiation. Other countries are heeding the wake-up call from the worse nuclear disaster since Chernobyl. Germany has decided to temporarily shut down seven older nuclear plants while it studies a more rapid conversion to renewable energy. China is suspending new nuclear power plant approvals and expediting inspections at existing plants. Spain has ordered a review of its nation's nuclear plants. Israel is now seriously rethinking nuclear power. New Zealand has banned nuclear. Many other countries are “rethinking” their nuclear policies.

In recent years, Nuclear Power Plants have been seen by many governments as one of the solutions to their country’s future source of power. Now, in the light of the disaster in Japan, world public opinion will almost certainly prohibit the construction of new Nuclear Power Plants. In that event, what other possible solution to the World’s power problem is available?

This paper examines that problem and the possible solution.

HOW MUCH POWER DO WE USE?

A colossal amount! The power we use from all sources is equivalent to the power contained in 130,000,000 tons of oil a year!

HOW MUCH POWER WILL WE NEED OVER THE NEXT DECADES?

Certainly much more than we consume now. Here are some of the reasons:

* Of the world’s present population, about one third, over 2 Billion, live below the poverty line. We need to lift those 2 Billion people out of poverty. This will require large volumes of power.

* If, as scientists predict, in the coming decades we will experience climate change and sea-level rise, many millions of people will have to be re-located. This will require also require large amounts of additional power.

* The world is running out of both drinking and irrigation water. The shortage can be met by De-Salination Plants, but these consume large amounts of electricity

Over the last 50 years, the world’s power consumption has been increasing by around 2% each year. If it continues to increase at that rate, in 50 years’ time we will need nearly three times as much power as we use now.

WHERE DOES OUR POWER COME FROM?

Currently, 87% of the world’s power consumption is obtained from the three fossil fuels, coal, oil and natural gas. Nuclear contributes 6%, and another 6% comes from Hydroelectric Plants (dams). Only about 1% is generated from the ‘Renewables’, Solar, Wind, Biofuel and Geothermal (natural hot water).

Other possible sources not so far developed are Wave-power, Tidal Flow, and Geothermal (using the Earth’s subterranean heat).

THE PROBLEM WITH FOSSIL FUELS

As stated above, by far the largest source of our power comes from burning coal, oil and natural gas, the Fossil Fuels. Looking forward, the world is presented with a major problem:

* The reserves of coal, oil and natural gas are finite, not replaceable.

* Because of the increasing difficulty, the price of power will progressively increase.

* Every country needs power, yet the major sources of that power, the three fossil fuels, are only found in some of the world’s countries. The increasing scarcity will inevitably cause international friction and even wars between the ‘have’ and ‘have not’ countries.

Over the coming decades we must phase out the generation of power by fossil fuels and replace it by phasing in an alternative source of power.

HOW COULD FOSSIL FUELS BE REPLACED?

Remembering that fossil fuels supply 87% of the power we consume, there is no possibility that this 87% can be replaced by solar, wind, biofuel, hydroelectric, tidal-flow or wave-power.

Nuclear Power could, in theory, replace fossil fuels. The number of plants required to replace the current consumption of fossil fuels would be up from the present 439 to a number in the order of 7,000 plants and, to keep pace with the World’s increasing needs over the coming decades, possibly up to three times that number. Nuclear plants on that scale would present vast problems in the disposal of radioactive nuclear waste and the supply of sufficient uranium.

However, logistical considerations apart, after the disaster in Japan public opinion will almost certainly prohibit the construction of any new nuclear plants in the foreseeable future.

So, where is our power to come from? How can we replace fossil fuels? Is there a solution?

Fortunately there is: the solution is Geothermal Energy.

WHAT IS GEOTHERMAL ENERGY?

Geothermal Energy is “Energy in the form of Heat emanating from within the Earth”.

At certain places on the Earth, subterranean reservoirs of hot water exist naturally. Natural hot springs were used in ancient times but it was not until the beginning of the 20th Century in Italy that natural hot water was used to generate electricity. Today Geothermal Power Plants using natural hot water exist in Iceland, USA, China, Sweden, New Zealand, Indonesia, and in several other countries.

The principle is simple. A well is drilled from the surface down to a natural reservoir of hot water. The water emerges as steam which is used to power a traditional steam turbine electricity generating plant. The spent steam is condensed back to water which is recycled back to the reservoir by means of another well – a closed loop system. The heat emanating from the centre of the earth reheats the reservoir. 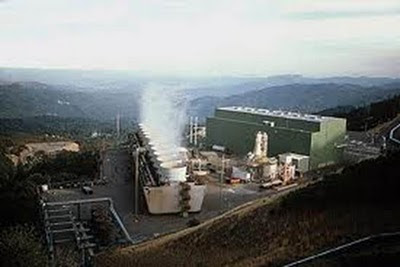 A Geothermal Power Plant in Iceland (The white emission is surplus steam)
Unfortunately, the planet holds relatively few such natural reservoirs of hot water. A few years ago, in Europe and in Australia, work was commenced on creating subterranean hot water reservoirs; the process is named an Enhanced Geothermal System (EGS). These pilot plants have proved the viability of the system.

At an EGS plant, water is pumped at very high pressure down a well (the Injection Well) which fractures the rock surrounding the end of the bore hole – this process, “Hydraulic Fracturing”, has for many years been in general use in the oil and gas industry. The injected water percolates through the fractured rock and forms an artificial or engineered underground reservoir. A second well (a Production Well) is bored some distance from the Injection Well. The injected water, raised to a high temperature by its passage through the fractured hot rock, travels up the Production Well emerging at the surface as superheated steam. The steam powers the turbines of a standard Electrical Power plant. The spent steam is condensed back to water and is injected down the Injection Well to replenish the engineered reservoir. The method of drilling the wells is the same as used in the oil and gas industry. 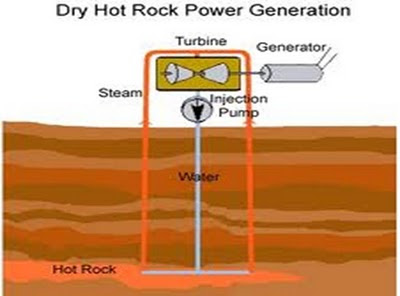 Hot Dry Rock Power Generation
In 2006 the Massachusetts Institute of Technology issued a report on “The Future of Geothermal Energy in the United States”. The findings include:
THE PRIZE

If the World were to adopt a programme of converting to Geothermal Energy, existing coal, oil, natural gas and nuclear electricity generating plants would be gradually replaced by EGS-powered generating plants. By or before 2050, the World would have discontinued the mining and use of coal, oil and gas; would be free of the harmful emissions that the burning of fossil fuels inevitably create; we would have eliminated the potential for conflict between the fossil fuel ‘have’ and ‘have not’ countries; we would have eliminated the danger of nuclear radioactive contamination; road vehicles, ships and aircraft would be emission-free, powered by electricity or electrically made hydrogen -- we would have eliminated city smog; and we would be well on the way to the elimination of poverty world-wide.

Note This paper includes many statements for which, in the interest of brevity, no source has been quoted. However, on request, I will supply corroboration for any and all of the statements made.
Posted by johnalexwood at 00:45 No comments:

Libya
image: yourchildlearns.com
As I See It………

Chapter I - Purposes and Principles

The Purposes of the United Nations are:

7. Nothing contained in the present Charter shall authorize the United Nations to intervene in matters which are essentially within the domestic jurisdiction of any state . . .

Chapter VII - Action with Respect to Threats to the Peace, Breaches of the Peace and Acts of Aggression

Should the Security Council consider that measures provided for in Article 41 (Economic measures) would be inadequate or have proved to be inadequate, it may take such action by air, sea, or land forces as may be necessary to maintain or restore international peace and security. Such action may include demonstrations, blockade, and other operations by air, sea, or land forces of Members of the United Nations.

1. All Members of the United Nations, in order to contribute to the maintenance of international peace and security, undertake to make available to the Security Council, on its call and in accordance with a special agreement or agreements, armed forces, assistance, and facilities, including rites of passage, necessary for the purpose of maintaining international peace and security.

Extracts from the Declaration on Rights and Duties of States

Every State has the right to independence and hence to exercise freely, without dictation by any other State, all its legal powers, including the choice of its own form of government.

Every State has the right to exercise jurisdiction over its territory and over all persons and things therein, subject to the immunities recognized by international law.

Every State has the duty to refrain from intervention in the internal or external affairs of any other State.

Every State has the duty to refrain from resorting to war as an instrument of national policy, and to refrain from the threat or use of force against the territorial integrity or political independence of another State, or in any other manner inconsistent with international law and order.


NEVERTHELESS, AND IN SPITE OF THE WORDING ABOVE, THE UN SECURITY COUNCIL ADOPTED RESOLUTION Nº 1973

Security Council Resolution Nº 1973 on the situation in Libya, is a measure that was adopted on 17 March 2011 based, it claims, on Chapter VII of the UN Charter (See Articles 42 and 43 above). The resolution was proposed by France, Lebanon, and the United Kingdom.

The resolution demands "an immediate ceasefire" and authorizes the international community to establish a “no-fly zone” over Libya and to use “all means necessary” short of foreign occupation to protect civilians.

From the extracts quoted above, it is clear that the function of the United Nations is to deal with international problems between nations, not to intervene in problems of civil unrest and revolutions within nations.

I had an amazing time at the Private View of the Affordable Art Fair 2011, in Battersea, London last night!

The art displayed in 120 stands was truly inspirational - it blew me away - and I met and got photos with 3 major celebs, plus bumped into a childhood friend.

I also met my favourite living artist, Chuck Elliott, and made a new friend: the amazing photographer Barry Cawston.

It was a fantastic day! 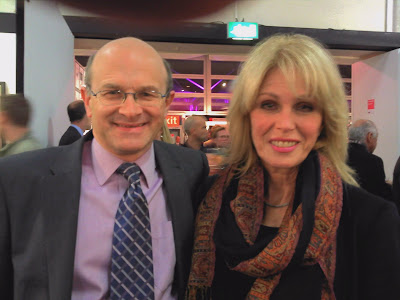 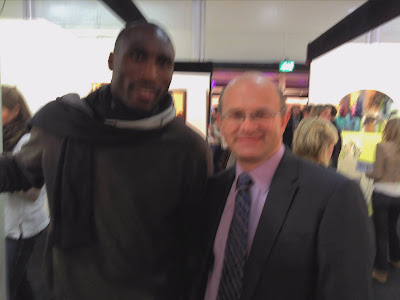 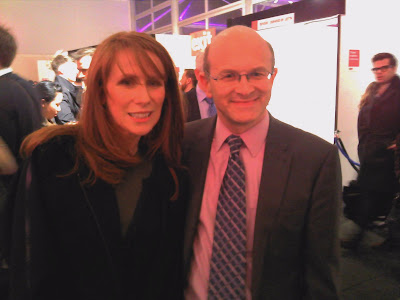 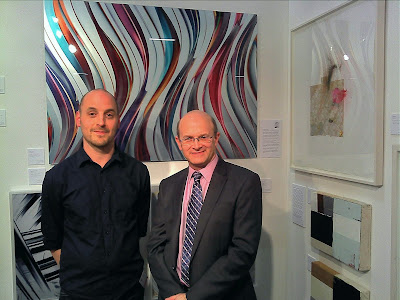 With my favourite (living) artist, Chuck Elliott
Posted by johnalexwood at 00:10 No comments:

Labels: aaf, art, battersea, london
Newer Posts Older Posts Home
Subscribe to: Posts (Atom)
Love Alter Bridge, Nicky Hopkins, Spamalot, Terry Gilliam's "Brazil", Monty Python and I am BFI's Biggest Monty Python Fan. My stepfather invented the Kenwood Chef, my father liberated Bergen-Belsen Concentration Camp and my godfather was Jagaddipendra Narayan, the Maharajah of Cooch Behar. Went to Cranleigh School and the University of Surrey. Scientologist. Vegan. East Grinstead. This blog is about all of the above and more, but not necessarily in that order.