The Launch of A Liar's Autobiography at LOCO Film Festival 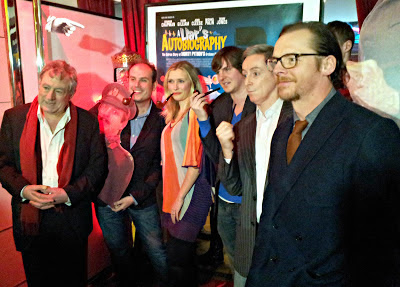 A Liar's Autobiography: The Untrue Story of Monty Python's Graham Chapman opened the LOCO Film Festival last night at BFI Southbank with all the excitement you'd expect at a movie premiere.

Celebrities present were Terry Jones who appears in the film (well, his voice does) and Simon Pegg who doesn't, but he came along, I assume, because he's a Monty Python fan like the rest of us; well those with good taste anyway. I said hello to Simon (I had to!) and told him I went to school with Eric Fellner. It seems they're good friends!


Rebecca Front and Tony Law were also there, both on the "What Have the Pythons Ever Given Us?"panel after the showing of the film, discussing the influence that Monty Python has had, and still has, over comedy in film and TV. I was also very happy to see Python stalwarts André Jacquemin and Julian Doyle there.
Part of the evening included the wonderful Animate Chapman Exhibition put on by Justin Weyers (the film's Animation Producer) of Made Visual which included artwork and props from the film as well as a live animation demonstration. On display too were Graham's Cambridge scarf, the sun motif worn by Graham in Monty Python and the Holy Grail, and the shoe (the sign!) from The Life of Brian.

An unexpected highlight for me happened during the "What Have the Pythons Ever Given Us?" discussion. I was sitting almost dead centre in the front row and on two occasions, Tony Law decided to loudly point me out to the whole audience as the World's Greatest Monty Python Fan. It was being videoed too, but you can edit that out can't you Ida?

What an incredible evening that was! I love the guys at Trinity Film! Thanks to Cedric Behrel (Co-founder and Co-director) who hired me, I am now working within the world of Monty Python, having been a dedicated fan for 40 years. I am so grateful to you Cedric! Thank you! My dream has become a reality.

Next up: A Liar's Autobiography goes on general release in the UK on 8 Feb but it can also be pre-ordered now from Amazon as a DVD or Blu Ray.

£1 goes to QUIT, the charity that helps prevent children from starting to smoke and adults to quit, for every pre-order of the film on DVD or Blu-ray. Visit: www. quit.org.uk until 1st Feb 2013.
Posted by johnalexwood at 15:31 No comments:

Neil Bentley Plays 'Sir Not Appearing' For One Night Only

Neil Bentley Plays 'Sir Not Appearing'
For One Night Only

Spamalot is on at the Playhouse Theatre, London.

The show is hilarious from beginning to end!

Go and see it for a fantastic night out!
Posted by johnalexwood at 03:40 No comments:

Labels: better than antidepressants, eric idle, funny, laugh, monty python, spamalot, west end
Newer Posts Older Posts Home
Subscribe to: Posts (Atom)
Love Alter Bridge, Nicky Hopkins, Spamalot, Terry Gilliam's "Brazil", Monty Python and I am BFI's Biggest Monty Python Fan. My stepfather invented the Kenwood Chef, my father liberated Bergen-Belsen Concentration Camp and my godfather was Jagaddipendra Narayan, the Maharajah of Cooch Behar. Went to Cranleigh School and the University of Surrey. Scientologist. Vegan. East Grinstead. This blog is about all of the above and more, but not necessarily in that order.