Climate Change: Man-Made or Not? 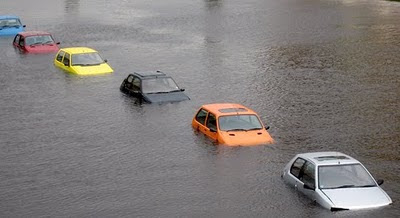 A year or two ago, the majority of the public believed that man-made CO2, caused by the burning of fossil fuels, was raising the Earth’s temperature and, consequently, was changing the Earth’s climate, and that if the man-made CO2 emissions were not drastically reduced, there would be disastrous results. Of late. opinions seem to be changing – now more than half the population no longer believes this to be true.

It is a fact that the temperature and the climate of the Earth have always changed over time. These changes are due to “natural causes”, that is, causes which have nothing to do with mankind’s activity.

Leaving aside such issues as misleading “hockey stick” graphs, Al Gore’s motives, tampering with meteorological data, bribing of scientists, vested interests of both the fossil fuel and the renewables industries, ice core samples and tree rings, flawed computer models, biased interpretation of data, etc, we are, as I see it, left with one question with two possible answers.

The question is, over and above changes in the Earth’s temperature and climate due to natural causes, will this additional man-made CO2 --
OR
Which case do you believe is right – the Activist’s or the Skeptic’s?

The way you answer the question leads on to other issues.

If you believe the former choice that the threat is real and urgent, then the question is what do you think should be done about it? What actions should be taken to cut down CO2 emissions and how drastic should those actions be? How is the inevitable detrimental effect that cutting CO2 emissions will have on the World’s economy to be handled? With this choice, you accept the risk that the Skeptics were right after all.

If you believe the latter choice, that there will be no, or only an insignificant amount of warming and climate change, then the quite considerable measures that have already been taken by governments to limit CO2 emissions should be dismantled forthwith. With this choice you accept the risk that the Activists were right after all.

My own personal opinion is the latter; that the additional man-made CO2 will have only an insignificant effect on the temperature and climate of the planet. (The Skeptic’s case). I believe that all CO2 emission reduction measures should be dismantled forthwith.

However, for an entirely different, non-CO2, reason, I believe that all countries should be taking urgent steps to secure their energy needs from sources other than fossil fuels.

Not the Messiah in the cinema

My mate Larry and I went to see Not the Messiah in the cinema in Crawley last night - the very performance I was at last October at the Royal Albert Hall.
The trouble was, I didn't have a very good view; I was right at the top and right at the back. I was too far away to properly see any detail on stage and the sound quality, from where I was standing, was awful so I couldn't hear very well either.

So it was wonderful, last night, to have seen everything I had missed, with close ups of every nuance of each of the performers who, I can see now, exude professionalism out of every pore. Respect! to Shannon Mercer, William Fergusson, Rosalind Plowright and Christopher Purves - and, of course, John Du Prez and Eric Idle.

It was interesting to see how they had edited it - but I think I'm going to have to write a letter about how much was lost from the scene where Gilliam is 'over amorous' to Carol Cleveland during "Find Your Dream". It was almost edited out for goodness sake!

Really enjoyed the show and had a wonderful time, so thanks again Eric!
.
Posted by johnalexwood at 07:23 No comments:

Labels: cinema, dvd, eric idle, life of brian, monty python, movie, not the messiah, royal albert hall
Newer Posts Older Posts Home
Subscribe to: Posts (Atom)
Love Alter Bridge, Nicky Hopkins, Spamalot, Terry Gilliam's "Brazil", Monty Python and I am BFI's Biggest Monty Python Fan. My stepfather invented the Kenwood Chef, my father liberated Bergen-Belsen Concentration Camp and my godfather was Jagaddipendra Narayan, the Maharajah of Cooch Behar. Went to Cranleigh School and the University of Surrey. Scientologist. Vegan. East Grinstead. This blog is about all of the above and more, but not necessarily in that order.