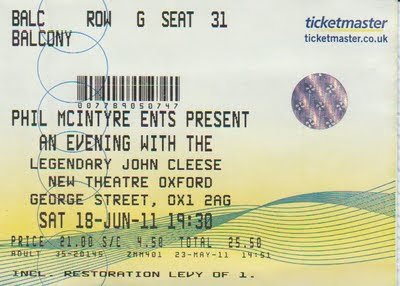 There's nothing wrong with JC's punctuality. The show started at 7.30pm on the dot!
The gibes at his ex-wife, Alyce Faye Eichelberger, to whom a judge has ordered him to pay $15m+, were funny and it was great to hear, first hand, how his career in television began (all thanks to David Frost!). Other highlights: tales of his phobia-ridden mother whom he thought looked a bit like Marty Feldman in her later years; jokes and even a very short poem he wrote at the expense of his hometown, Weston Super Mare, "whose inhabitants' sole ambition seems to be to get into their coffins without ever being embarrassed - they'd have a lot more fun if they stopped worrying about it so much" (I'm paraphrasing); the crazy antics of Dr Graham Chapman including JC's speech at Graham's memorial service; the story behind Fawlty Towers and a few possible reasons why it was such a success; an analysis of black humour and why it works; how A Fish Called Wanda got off the ground and the extensive audience surveys that were done before its release. Then the show seemed to end abruptly... but I did like the little curtsy he did during his curtain call, pulling his jeans outwards, as if they were a skirt. 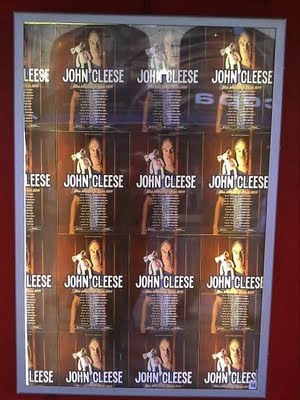 The poster display outside the theatre
Despite being a lifelong fan of John Cleese, the compliments have to end here I'm afraid.
I was expecting a few more laughs to be honest - a bit more of 'a show'; not a single Python clip was played, although he did talk about Python quite a bit and explained (and misquoted - he never mentioned the brocoli!) rather than played the clip of, the Undertakers Sketch!; Life of Brian - not a mention; Meaning of Life - not a mention!; and then the show ended and my friends and I were saying to each other that the show seemed to have ended a bit early... "Is that it?" 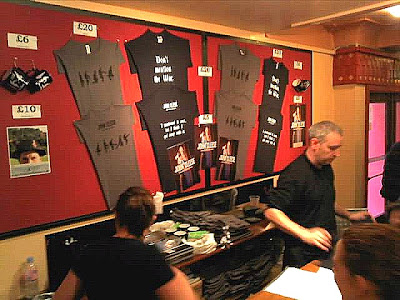 John Cleese merchandising - Rebecca bought me a Silly Walks mug and the show programme
Then, to make matters worse, the approx 30-strong crowd waiting patiently to meet JC at the stage door after the show were told that Mr Cleese will not be meeting fans and signing autographs. It was quite a slap in the face and I was quite put out by this, as were the other 29 people who had been waiting.
I met John Cleese once before at the Secret Policeman's Biggest Ball when I asked him the meaning the Gavin Millarrrrrrr sketch ("People like me who talk loudly in restaurants...") but I didn't get a photo with him at that time, so I was really looking forward to putting that right, this time.
I know we only bought a ticket to see the show and that didn't give us the right to meet him as well, but it would only have taken a few minutes of his time, and surely it can only generate goodwill that might help contribute to selling a few more tickets of future shows? Word of mouth, bloggers, Twitter users etc. Tom Cruise allows 2 hours for the thousands waiting for him at premieres, to sign autographs, pose for photos and even talk to the mums of his fans on their mobile phones. There was only 30 of us and we just wanted to say hello...
I decided to make further enquiries by asking the stage door security if what we had been told was true. They said, "He's not coming out." Ironically, that reminded me of the Mattress sketch where Graham Chapman puts a paper bag over his head every time anyone utters the word "mattress" and then says "I'm not coming out!" So I replied, "Does he live here, or what?" I was told that he 'had guests' and won't be leaving for a long time. That didn't ring true to me - why would they hang around in the changing room of a theatre for hours rather than, say, go out to a restaurant? Then I was also told that he sometimes makes a clandestine getaway...
Very disappointed and with unused camera in hand, I decided to drop it and just go home. At that moment, a nice looking car left the theatre's private car park and started to drive towards the main entrance. Some fans guessed that the car was going to pick JC up round the front and they ran off in the hope of meeting him on his way into the car (in disguise, no doubt). I decided I'd leave them to it and just went home.
Posted by johnalexwood at 16:41 4 comments:

Labels: comedy, films, harry potter, james bond, monty python, movies, oxford
Newer Posts Older Posts Home
Subscribe to: Posts (Atom)
Love Alter Bridge, Nicky Hopkins, Spamalot, Terry Gilliam's "Brazil", Monty Python and I am BFI's Biggest Monty Python Fan. My stepfather invented the Kenwood Chef, my father liberated Bergen-Belsen Concentration Camp and my godfather was Jagaddipendra Narayan, the Maharajah of Cooch Behar. Went to Cranleigh School and the University of Surrey. Scientologist. Vegan. East Grinstead. This blog is about all of the above and more, but not necessarily in that order.