Monty Python is all around me!

Places mentioned in Monty Python sketches are all around me here e.g. one train station on the way to London is Purley (Say No More!); I used to live in Dorking ("Mr Ken Dove, the most interesting man in Dorking"); and in this sketch, "Picasso, painting whilst cycling":


I went to school in Chichester; I use the A272 regularly; Hindhead is just up the road from my mum's; I use the A3 to get to my mum's; I used to live very near Kingston; Ewhurst was the next door village to where I went to school (it's where Eric Clapton lives); I drove through Gomshall and Peaslake (which Palin mixes up - we'll never know why - and says "Gomslake and Peashall") to get to my mum's on Xmas Day; and my chemistry teacher lived in Wisborough Green. I just love it!

The three Picasso (1881-1973) paintings that Graham Chapman (as Ron Geppo, British Cycling Sprint Champion and this year's winner of the Derby Doncaster Ralley) mentions are:

Geppo: "Well Reg, I think Pablo should be alright, provided he doesn't attempt anything on the monumental scale of some of his earlier paintings, like 'Guernica' or 'Mademoiselles d'Avignon' or even his later 'War and Peace' murals for the Temple of Peace chapel at Vallauris, because with this strong head wind, I don't think even Doug Timpson of Manchester Harriers could paint anything on that kind of scale."

And, just for the sake of completeness, here are the other artists in the race, according to John Cleese (as Sam Trench):
Monty Python is SO educational!

Observation: only 8 of the 19 painters mentioned (in bold above, plus Picasso himself) were actually alive when this sketch was first broadcast on 5 October 1969!

This was quite simply, the best concert I've ever been to!

I've seen Alter Bridge many times, but this was the best they've ever played in my opinion. It seems they warm to a huge venue, especially one of such significance.

Posted by johnalexwood at 05:18 No comments: 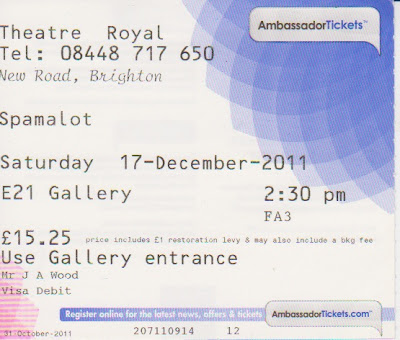 Yes, that was the 9th time I've seen the show (or was it my 10th?) On this occasion, I went with 11 friends to whom I had sold the idea, using extreme enthusiasm as a method of getting my own way! It worked!

Sorry, no pictures this time.

Needless to say, the show was excellent, with me smiling from ear to ear the whole show through, and me constantly wiping away tears of laughter, as usual. And everyone else seemed to have a good time too.

Spamalot is currently touring the UK so don't miss it http://www.spamalotontour.co.uk/tour

The show is SO good, you simply cannot, must not and should not miss it!
Posted by johnalexwood at 04:09 No comments:

Our Exclusive Preview of A Liar's Autobiography: The Untrue Story of Monty Python's Graham Chapman

Ever since first hearing the Python albums in my teens, I have been in awe of the sound engineer who recorded them. The sound effects and editing on those albums; such excellence! I never thought, then, that I would ever meet the famous André Jacquemin. In fact, for some reason, I was convinced that it was never going to happen. However, at the premier of Julian Doyle and Bruce Dickenson's Chemical Wedding, it did, and I have been in touch with André ever since. My questions to him are usually about how he made this or that sound effect on one of the Python albums.

Then I saw him again at Not the Messiah, Monty Python's 40th Anniversary show at the Royal Albert Hall. He was given the ultimate Python accolade of being one of the Mounties in the finale of the show; the Lumberjack Song. We had a chat at the stage door.

Then it occurred to me that since André recorded all of the Python albums (such as Another Monty Python Record, Monty Python's Previous Record, Matching Tie and Handkerchief, The Album Of The Soundtrack Of The Trailer Of The Film Of Monty Python And The Holy Grail and Monty Python's Contractual Obligation Album, there must have been some out-takes of those albums. So I asked him if he still had any on file. He said he had. Realising how special these out-takes are and how probably very few people outside of the Python inner sanctum will ever have heard them, (and because I'm getting pretty good at inviting myself to things in my middle age), I asked André if I, plus a few friends, could pop in to his studio to have a listen.

Not only did he say yes, but he also asked if we would like to see a preview of the 3d animated movie, A Liar's Autobiography, as he was currently adding the sound effects to it etc before its general release sometime in the new year.

2pm Sunday 27th November finally arrived and three of my Python-fan friends, Ennis Thompson, Larry Lloyd and Annie Terzoglou, trundled along to André's Redwood Studios in Great Chapel Street, Soho, London (only a stone's throw from the Nellie Dean Pub where I first met Terry Jones and Michael Palin in 1975). We were greeted by a very welcoming André Jacquemin who, generously, ended up spending two and a half hours with us!

He played us the first approx 8 minutes that he had already worked on of the film (looks amazing!), as well as all sorts of audio clips including some out-takes from the 1970s and 80s (the Pythons clearing their throats and asking André if he'd like them to read that again) as well as the complete opening song for The Meaning of Life movie, sung my Terry Jones, that was never used in the end. Similarly, we heard The unused and ridiculous Audition sketch that was only recorded because there was some studio time to kill, and we saw some very silly animated sequences from Monty Python and the Holy Grail that were also never used, but are included on the forthcoming Blu-ray version of the film.

He also regaled us with tales of how, aged only around 18, he got to work with the Pythons and the moment when it dawned on him exactly who these people were that were asking him to record albums for them! He also told us about the live Python shows he worked on such as Live at the Hollywood Bowl and Live at Drury Lane and how, during the 2002 Memorial Concert for George Harrison, a CD malfunctioned at a crucial moment where the lights come up and music is supposed to play. Miraculously, he got it working again just in time - so much so that afterwards, people congratulated him for getting the timing spot on!


Eric Idle, Terry Gilliam, Terry Jones and Neil Innes singing "Sit On My Face" at the Memorial Concert for George Harrison. 0:19 into this video: the moment when, by the skin of his teeth, André Jacquemin's career didn't end!

Python fan extraordinaire and Beatle, George Harrison, even used to call him and ask for his help when he needed sound effects!

It was a fascinating day and we are very grateful to you André for giving us such an extremely special, once-in-a-lifetime Pythonesque experience! Thank you so much!

For the latest "Liar's Autobiography" News:  http://ow.ly/8aKsB
Posted by johnalexwood at 16:14 No comments:

What have Star Wars and Jabberwocky got in common?

The answer: the actor Dave Prowse who played Red Herring and Black Knights in Terry Gilliam's 1977 film, Jabberwocky and then went on to play Darth Vader in Star Wars.

He was present at the recent opening of Rebecca Grant's art exhibition which I was also attending, so, seeing as I am a bit of a Gilliam fan to say the least, it was quite a coincidence! 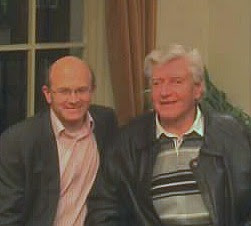 Me with Dave Prowse (Darth Vader)

He told me about his scene in Jabberwocky where he half falls off a horse; his foot gets stuck in the stirrup and he gets dragged quite some distance by the horse. It nearly killed him, but he said Terry Gilliam loved it and it stayed in the film. Here's the trailer. (He's the one in full armour riding a horse):


What a thoroughly nice chap he was too. His presence created tangible excitement at the exhibition, and he was more than happy to pose for photos, sign autographs and answer everyone's questions about the filming of Star Wars and about playing Darth Vader.

Dave is currently making public appearances to promote his book "Straight From The Force's Mouth", so if you'd like to meet him, click here: http://www.darthvader-starwars.com/appearances.htm

By the way, a month or so ago, whilst visiting the Kamini Beauty Salon, I bumped into supermodel and actress Lily Cole who played a lead role in Terry Gilliam's "The Imaginarium of Doctor Parnassus" - so this Terry Gilliam coincidence thing is pretty amazing don't you think, especially when you take into account all the unbelievable coincidences I have already had with his 1985 movie "Brazil"...
Posted by johnalexwood at 10:04 No comments:

Labels: celebs, film, film director, monty python, movies, star wars, terry gilliam
Newer Posts Older Posts Home
Subscribe to: Posts (Atom)
Love Alter Bridge, Nicky Hopkins, Spamalot, Terry Gilliam's "Brazil", Monty Python and I am BFI's Biggest Monty Python Fan. My stepfather invented the Kenwood Chef, my father liberated Bergen-Belsen Concentration Camp and my godfather was Jagaddipendra Narayan, the Maharajah of Cooch Behar. Went to Cranleigh School and the University of Surrey. Scientologist. Vegan. East Grinstead. This blog is about all of the above and more, but not necessarily in that order.