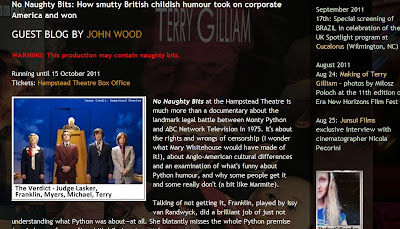 Posted by johnalexwood at 22:58 No comments:

A very short and very loud clip of Terry Gilliam gesticulating a lot
It was a total celeb-fest! In other words, to use a Jonathan Ross term, the celeb/civilian quotient was rather high! 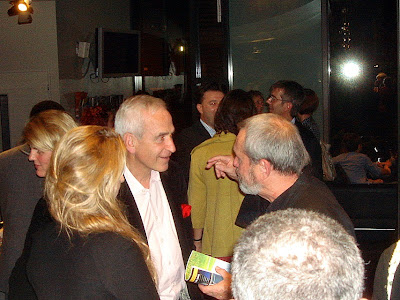 Nigel Franklin talking to Terry Gilliam still gesticulating
In no particular order, on Tues 13 Sept, in addition to Terry Gilliam himself, the Hampstead Theatre was graced by:
I had such fun that night - one of the most amazing and memorable nights of my life. Thank you SO much to all the lovely staff of the Hampstead Theatre who looked after me so well.
I gave the author of http://therealgilliamfan.blogspot.com over in the US a bit of a shock during the interval. I called her up, then handed my phone to Terry Gilliam. She blogged about the experience here: I Just Told Terry Gilliam "I Love You!!".
In addition to chatting with Terry, I was very pleased to be able to see Simon Jones again. He is SUCH a lovely man. So warm, kind and friendly. I had to talk about his "This is my receipt for your receipt" scene in Brazil, obviously. I also met his wife, Nancy Lewis-Jones, who I think was very tickled for having just seen herself on stage in 1975. And I met their charming son, Tim Jones, who took this picture of his dad and I. 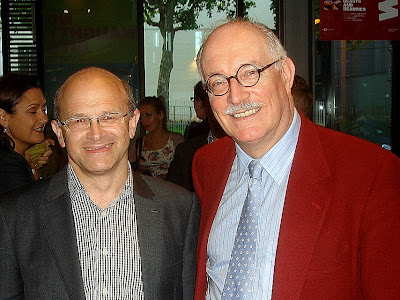 John Wood (me) with Simon Jones
As if that wasn't enough, I ALSO had a chat with David Gilmour. I told him that the album Wish You Were Here was a major part of my school years and that it is just an incredible album. I've got an idea I'm not the first to tell him that, but I'm really glad I did anyway. It sort of completes the circle, and it's not every day you get the opportunity to do that sort of thing now is it?
Press Night Photos/Reviews
The Real Gilliam Fan Blog
Other links 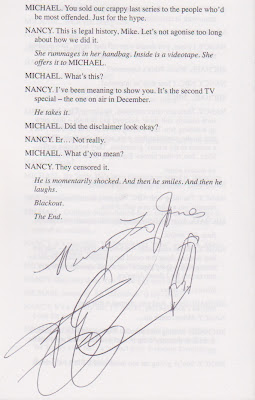 The last page of the script, signed by Nancy Lewis-Jones and Terry Gilliam
Posted by johnalexwood at 10:58 No comments: 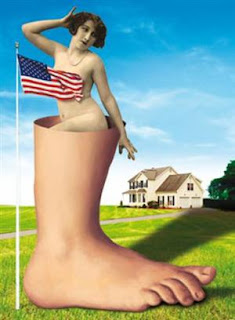 Read my guest post over on TheRealGilliamFan blog about Hampstead Theatre's "No Naughty Bits" which re-imagines Monty Python's landmark 1975 U.S. case concerning the unauthorized edits by the ABC TV Network of episodes of the 4th Python series. 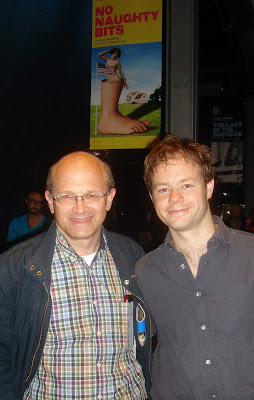 John Wood (me) with Sam Alexander who plays Terry Gilliam
Posted by johnalexwood at 02:23 No comments: