The Day I Met Tim Vine

I needed to go online, so I popped into the nearest Internet café only to find, to my amazement, sitting at one of the terminals was the very funny comedian Tim Vine!

Being one who is not backwards in coming forwards, I decided to sit at the terminal right next to his; I had every intention of saying hello, but rather than just going, "Hello Tim", I thought I'd do something a little more original.

I knew he used Twitter, and I assumed that since he was online, he'd very likely be on Twitter at that moment, so I decided to tweet to him without saying a word to see if he noticed. It worked a tweet treat! Here's my tweet:

I waited a few minutes and then he suddenly looked to his right and stared right at me with wide eyes! It was a very special moment and we both had a good laugh!

He told me the reason he had gone into the Internet café was to find somewhere he could buy some plastic fruit for the show he was doing that night.
Posted by johnalexwood at 15:56 No comments: 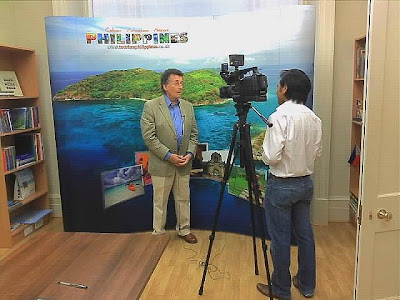 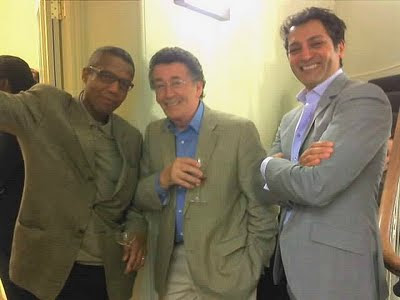 I took this photo of Hugh Quarshie, Robert Powell and Hari Dhillon (who play Holby City characters Ric Griffin, Mark Williams and Mr Michael Spence respectively) and was just about to tweet it when they told me what wording to tweet with it. Namely, "At Rebecca Grant's art exhib opening at Philippine Embassy with all the important cast members of Holby City! http://ow.ly/i/dSMh" 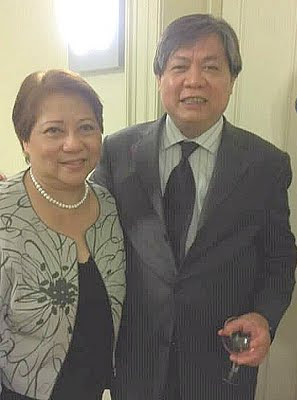 Ambassador Reynaldo Catapang and his wife 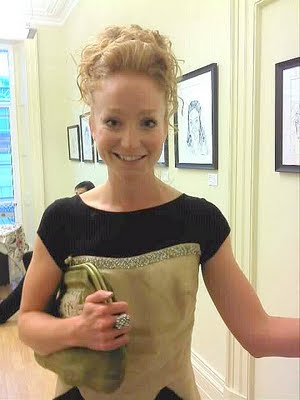 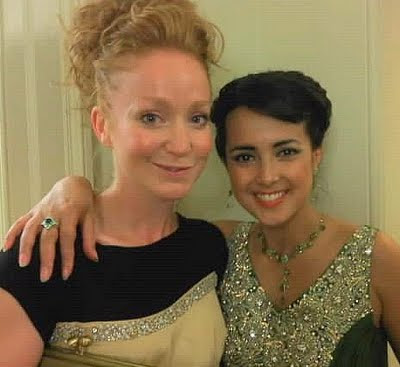 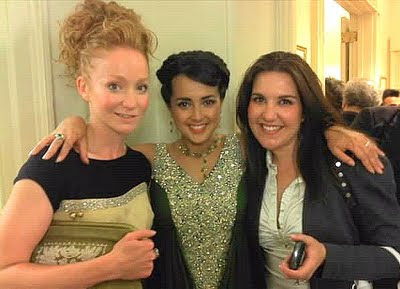 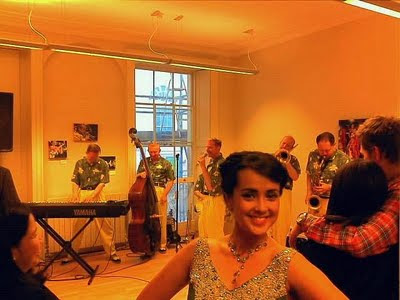 Rebecca Grant about to perform with the Jive Aces 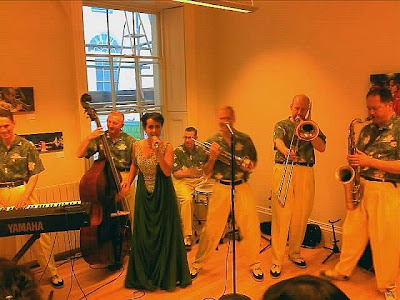 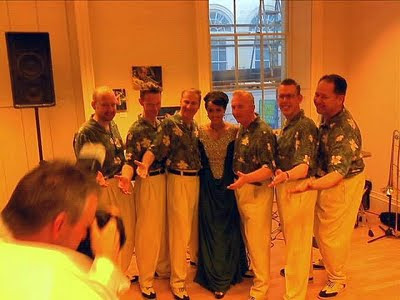 Rebecca Grant with the Jive Aces 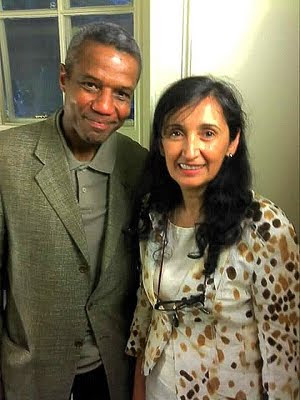 Actor Hugh Quarshie with my dear friend, Gaby Gadiot
4 July 2011: Rebecca Grant, perhaps best known for playing Daisha Anderson in Holby City, looked stunning as always. She not only hosted the Private View of her art exhibition (which ran from 5-15 July), but she also performed several numbers with the wonderful foot-tapping Jive Aces, with whom she regularly performs. I had a centre-stage view - such fun! I was smiling from ear to ear throughout the whole performance!
The invited crowd was awash with VIPs and celebs including many cast members of Holby City (including Paul Bradley but I never got a photo of him) as well as the Ambassador of the Philippines, Reynaldo Catapang and his wife, so the whole event had such a buzz! .
See also:
http://philippinegenerations.blogspot.com/2011/07/rebecca-grant-actor-and-art.html
http://rebeccagrant-official.blogspot.com/2011/07/actor-art-on-bbc-radio-london_12.html
http://rebeccagrant-official.blogspot.com/2011/07/hot-off-press-actor-art-rebecca-grant.html
http://www.facebook.com/PhilippineEmbassyLondon/posts/245176685494728
http://www.flickr.com/photos/philembassylondon/sets/72157627022769421/
http://philippinebritish.com/arts/tv-actors-debut-art-exhibition-at-the-philippine-embassy-london
Posted by johnalexwood at 00:47 No comments:

Labels: actors, art gallery, celebrities, drawings, paintings, tv
Newer Posts Older Posts Home
Subscribe to: Posts (Atom)
Love Alter Bridge, Nicky Hopkins, Spamalot, Terry Gilliam's "Brazil", Monty Python and I am BFI's Biggest Monty Python Fan. My stepfather invented the Kenwood Chef, my father liberated Bergen-Belsen Concentration Camp and my godfather was Jagaddipendra Narayan, the Maharajah of Cooch Behar. Went to Cranleigh School and the University of Surrey. Scientologist. Vegan. East Grinstead. This blog is about all of the above and more, but not necessarily in that order.