Friends' reunion and memorial for my brother Nick at Old Thorns

On Feb 1st of this year, my brother Nick, aged 59, sadly passed away. His funeral was held in Munich where he had been living since 1980. Consequently, his friends from the 1960s and 70s were not able to be there to say their goodbyes, so we held a Memorial for him (which doubled up as a 30-40 year friends' reunion) on June 17th.

It was wonderful to see everyone again and hear the fond memories they have of Nick.

The occasion took place in the Kenwood Suite (by coincidence and not by design!) at Old Thorns, our former family home, now a thriving golf hotel and country estate in Liphook, Hampshire. It's the perfect wedding venue and is so huge now, that it can hold two weddings at the same time! Funnily enough, Old Thorns was where Nick Berney and his bride Angie held their wedding reception back in 1979!

Posted by johnalexwood at 23:17 No comments:

I went to Download Festival 2014 and saw Alter Bridge and Aerosmith - what a show! And hung out with Alter Bridge and Steel Panther backstage. The friends I took with me shouted "I love you" to Steve Tyler as he drove right past us in his chauffeur-driven car, seconds after coming off stage and he replied "Love you more!" What a mind-blowing day! Here are my photos: http://ow.ly/ycep6

Then, the following day, I went to Metal Hammer's Golden Gods Awards Show at the O2 where I met Dave Prowse who played Darth Vader in Star Wars and Paul Geary, original drummer of Extreme. The show was hosted by Steel Panther who were outrageous and hilarious (obviously), and the bands I saw perform included Black Stone Cherry, Beowülf and Dillinger Escape Plan, and the rock legends who received or presented awards included Joe Perry of Aerosmith, Myles Kennedy & Mark Tremonti of Alter Bridge, Michael Munroe and Michael Shenker. It was an unforgettable night! Here are my photos: https://it.thislife.com/Ts9GaQ1t

Posted by johnalexwood at 22:35 No comments:

Preview of "Night Will Fall" 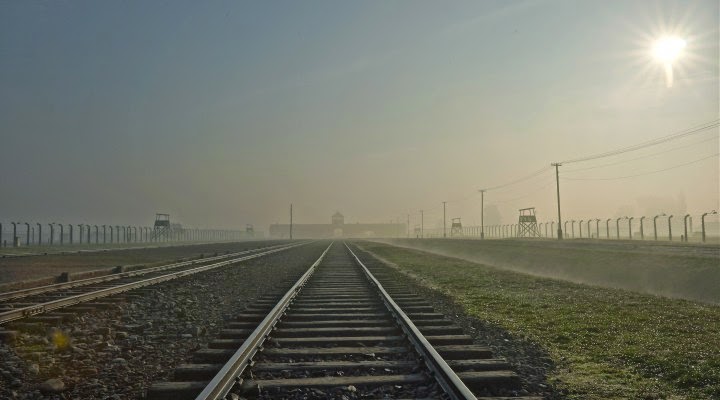 Yesterday, I was invited to a preview (the first-ever public screening) of the feature-length documentary "Night Will Fall" at the BFI Southbank. The audience comprised those involved with the making of the film. My father, Leonard Berney, appears on screen many times, giving his account of the liberation of Bergen-Belsen.

The film is really quite harrowing and it doesn't pull any punches at all. It gets across in graphic detail what it was like to witness the horrors at the aftermath of the Nazi concentration camps, close up. Just watching it on film was difficult enough, so to have actually been there; to have seen it and smelled it first hand is an experience that is difficult to imagine.

When the credits had finished rolling and the lights had faded up, the audience were in stunned silence.

Night Will Fall (2014)
Feature Length Documentary
Synopsis
In the spring of 1945, Allied forces liberating Europe found evidence of atrocities which have tortured the world’s conscience ever since. As the troops entered the German concentration camps, they made a systematic film record of what they saw. Work began on a documentary to show the horror they witnessed to the German population.

Sidney Bernstein, chief of the Psychological Warfare Film Section of SHAEF commissioned the film. Those involved in the production included Alfred Hitchcock and renowned editor Stewart McAllister; they produced perhaps the most remarkable testament of the 20th Century. “No German can say he didn’t know” insists the commentary, co-written by Richard Crossman, the future cabinet minister.

40 years later an American researcher found a rusty can marked “F3080” in the vaults of London’s Imperial War Museum. It was in very poor condition and the last roll was missing, but in 1985 a scratched and blurry copy was shown on PBS in America. Now after three years of work by Dr Toby Haggith of the IWM, the entire film has been fully restored and piece by piece, frame by frame, the lost last reel has been put together from the original shot lists. For the first time in history the completed “F3080” is ready to be shown.

Spring Films is co-producing with Angel TV a 90 minute documentary for theatrical and television release. This documentary, ‘Night Will Fall’ is to coincide with the release of the remastered original film and will tell the remarkable story behind the making of the film, the people involved and the reasons why it was never shown.

Posted by johnalexwood at 13:02 No comments: