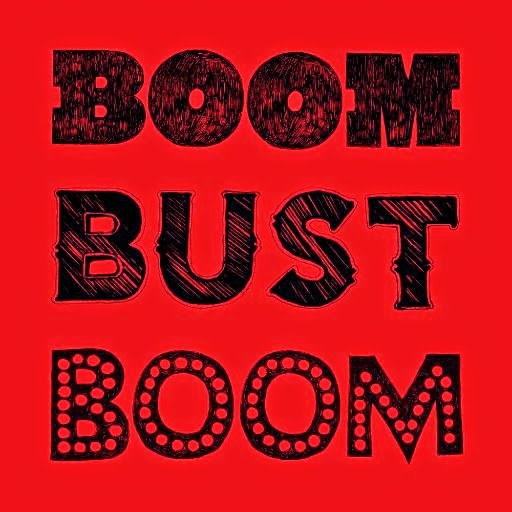 
My most memorable moments of last night were:
Posted by johnalexwood at 23:34 No comments:

Private HW Purser 18642
9th Royal Sussex Regt
37 Councillor St
Camberwell
SE5
Dear Sirs,
In reply to your letter, I have much pleasure in writing these few lines but, being a little depreciative of journalism, you will help in my case. Being captured at Démuin near Villers-Bretonneux on the 30th March at 10am after losing nearly all my comrades 250 strong, only three of us coming out unscathed and from that spot we walked a mile or so meeting a regiment of Prussian guards the officer in charge after questioning us for a minute or so, threatened us three with the point of a revolver to carry a wounded German officer who had been shot through both legs to their nearest dressing station, this being a church a mile or so further on, but after passing by the officer who had spoken to us, before attending the wounded German we got punched and kicked by the private soldiers as they passed by us. After seeing our wounded man safely at the dressing station we were told to carry on walking which we did for another 2 hours.
Still rather hungry, as we had had very little to eat the last 5 days, being mixed up with strays from other regiments and never out of the fighting, at the end of our weary walk which would surely have done us more good to have a rest as we were all dead tired having very little rest one night in 9 days. Eventually we were taken into a large house by a female soldier who was looking out for prisoners where we came across a score or more of our own comrades where we were searched. Rings, watches, photos & correspondence were taken from us. All photos with writing of any description were torn up, others were given back to us with the exception of rings & watches.
From this unknown place we were sent along to Rousel (?) where we were to bury dead for 3 days as fast as we could in bundles of items. From this place we were sent on to Péronne where we worked hard for 600 gms of bread equivalent to one food __ slice of bread with sauerkraut using shovel & pick for 8 to 10 hours a day breaking down a bridge that can open (?) The Somme.
After a fortnight and gradually losing weight oz by oz I was taller,  bad with dysentery and, after being unfit to work by their doctor, spent 3 days in bed. On the fourth I was out at work again only to break down on the walk from our hollen down camp "some houses barbed wire all round with no tops upon them about a mile away, every time I fell out of line I was told to loose(?)" with the butt of a rifle meeting the middle of my back and this is I got at least a dozen times before the day was out. I reported some at camp but nothing came from my complaint, my spirit and friendly telling to my fellow creatures were more than shattered and I swore that my revenge would come on our postern (guard) well within a fortnight or so after our hard task of manual labour had ceased (I being a clerk found this hard work).

I thought a blog post about my grandfather's role in World War One would be fitting for today. He was a private in the 9th Battalion of the Royal Sussex Regiment. He told me he was a sniper and he used a rifle with a telescopic lens to shoot Germans in their trenches when they went to the loo. He also told me that if ever captured as a sniper, it would be instant execution. He was captured, in fact, but luckily managed to rip off his sniper badge just in time. Of his POW experiences, he fascinated me as a child by telling me how he escaped from his POW camp and was on the run for days. He said he hid in bales of hay, and the Germans even prodded the hay with forks but luckily missed him. He said he was still on the run for several days after the war ended but had no idea it was all over.

Yet, in his write up which I only recently read for the first time, it's a slightly different story. Now I'm not sure which version is what actually happened.
Posted by johnalexwood at 23:20 No comments:

BFI Screening of Brazil in the presence of Terry Gilliam himself

"In Terry Gilliam’s distinctly British ‘retro-futurist’ take on George Orwell’s nightmare prophecy, omniscient state bureaucracy runs mad. The film follows low-level technocrat and fantasist Sam Lowry (Pryce) as he attempts to rectify an administrative error that has seen an innocent man arrested while the real ‘enemy,’ Tuttle (De Niro), roams free. All the while, Lowry pursues Jill (Kim Greist), the girl of his dreams. The visual invention, social commentary and dark wit of Brazil still astonishes, in what may well be Gilliam’s masterpiece." James Bell, BFI

How often do you get a chance to have your favourite film introduced by its director, have him watch the film with you and then listen to him discuss it in a Q&A afterwards? Well, almost never, but that's exactly what happened last night for me!

When I saw Brazil for the first time in 1986, it was a major and significant event in my life. It was almost a religious experience for Pete's sake! Since then, the film has loomed large in my life. I've visited many of its filming locations and met many of its cast and crew (several by complete coincidence, including Terry himself back in 1991), but that's a pipe of a different colour. If I was ever to write an autobiography, the Brazil chapter would take up a lot of pages.

So last night was very special for me. I've met Terry many times over the years now, including a 3-hour lunch back in 1991 to talk about Brazil, and I had a nice chat with him last night too. I tried to listen to what he was saying, but it was difficult because of the voice in my head which was louder than his, saying,


"Wow, you're talking with Terry Gilliam! Can you believe that?"

I had to make sure he remembered me first. I was in the front row, clearly visible to him throughout the Q&A and he said that he had been looking at me, trying to figure out why he recognized me. I didn't tell him anything about winning the BFI competition as the biggest Monty Python fan, nor about appearing in Molly Lavik's book because of my Python Passion: "Going Supernova - The Bold Paths of 101 Superachievers", nor did I tell him about the fact that Python has shaped my whole life, influencing my marriage, and that I found my new love through the Monty Python dating Facebook group I set up. Maybe I should have done, but this was his show, not mine.

What I did ask him was where all the Brazil props have ended up. He told me he has one of the masks (I think he meant the one that Michael Palin wore), the flying Sam model and an Executive Toy ("Something  an executive") but he really didn't know where all the rest went. I told him I had heard that the film's producer Arnon Michan has the samurai warrior suit and he had heard the same, and he thinks maybe Arnon has more props too. So, I now want to contact Arnon. How the hell do I do that? Any ideas anyone?

The reason for the film's screening last night? It was part of the BFI's "Sci-Fi: Days of Fear and Wonder: Tomorrow’s World" season - which is ironic because Terry explained during the Q&A that he never intended Brazil to be a Sci-Fi film at all. He said it was really a political cartoon that was taking place in a time that was a combination of past, present and future.

I assume Brazil will be back on the agenda next year for its 30th anniversary. One question that never came up during the Q&A was whether Terry thinks Brazil is his masterpiece or whether he's fed up with people going on about it, wishing they would talk about his more recent work. Maybe I'll ask him that next time. What do you think? 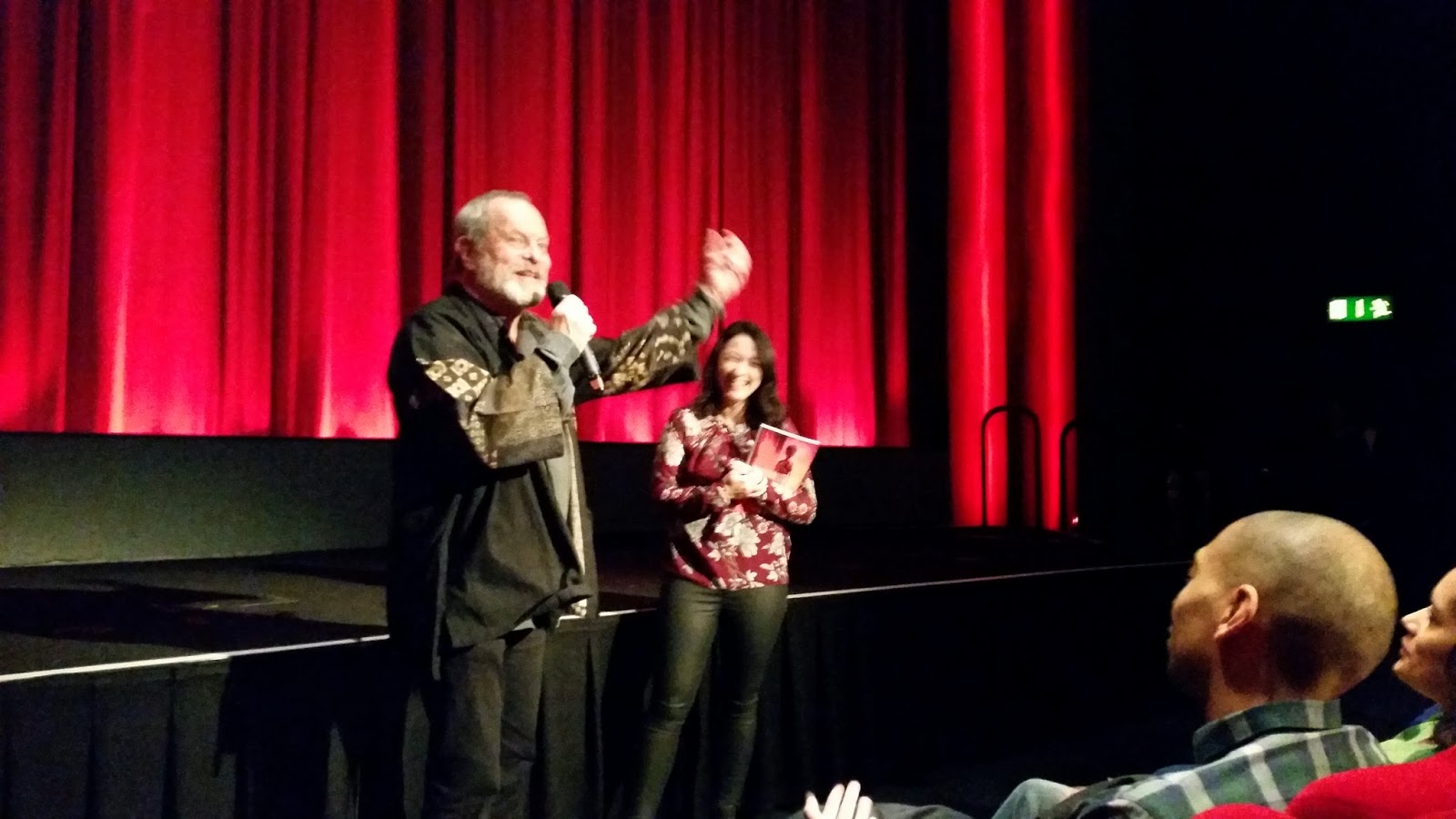 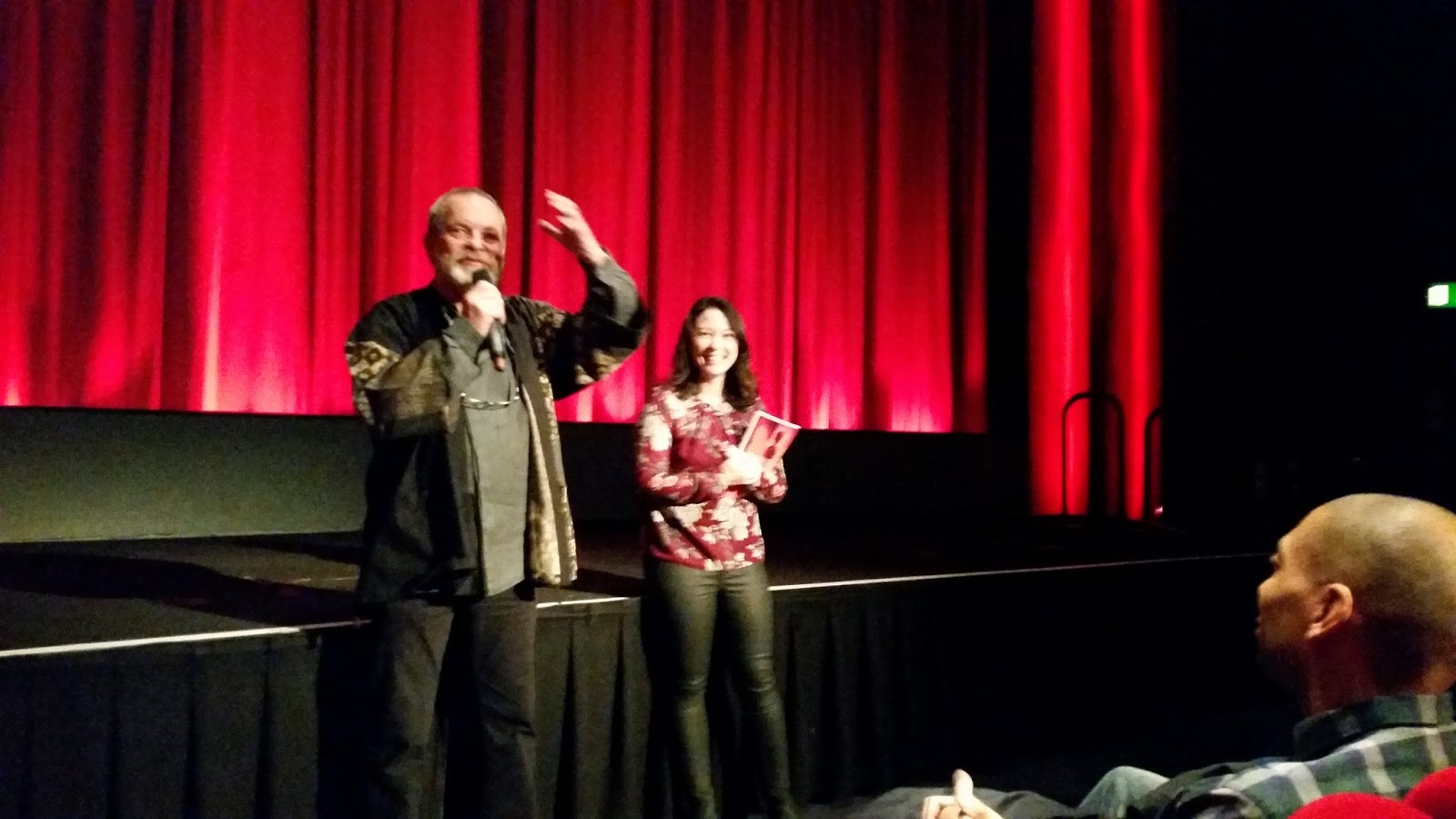 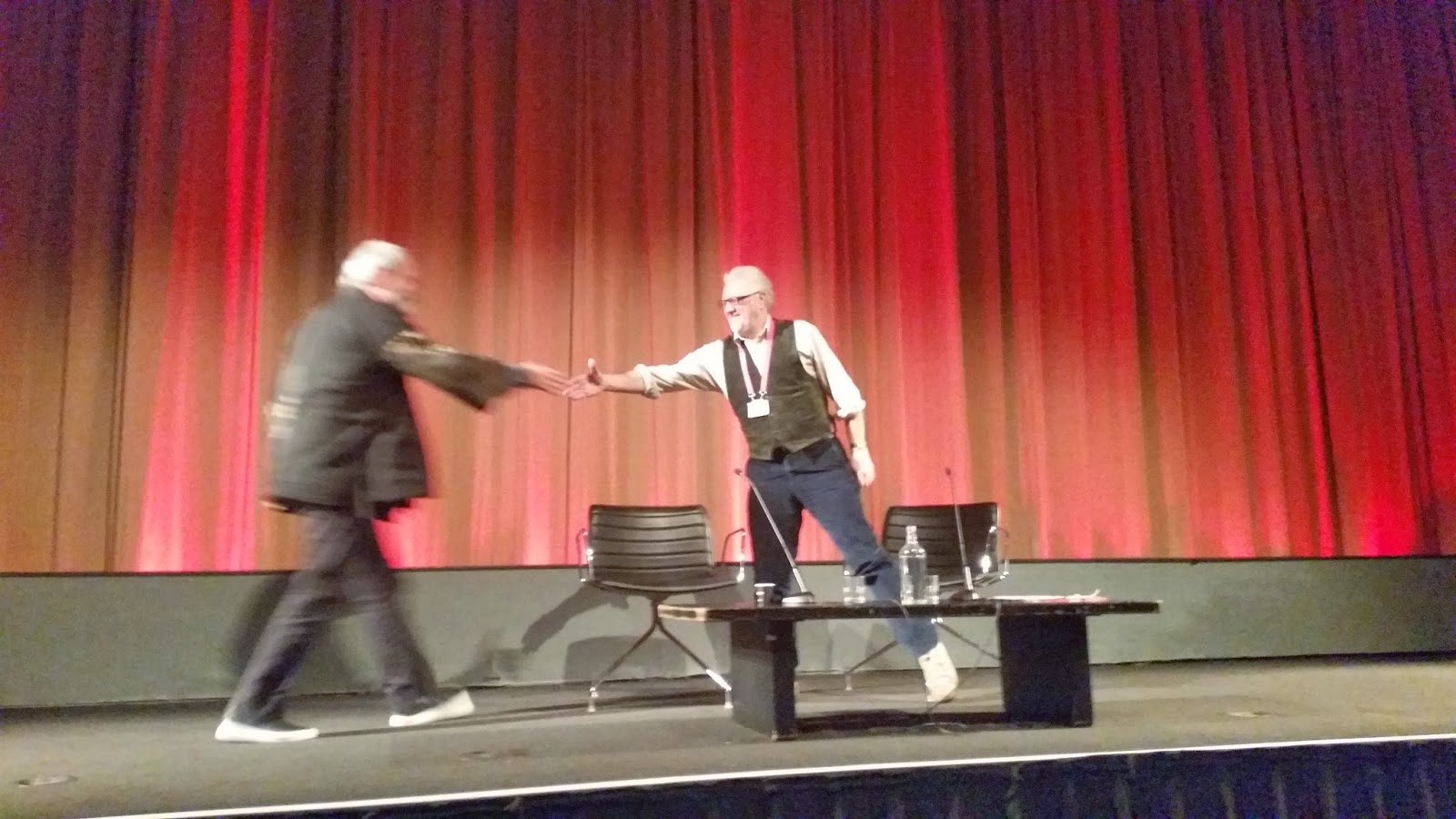 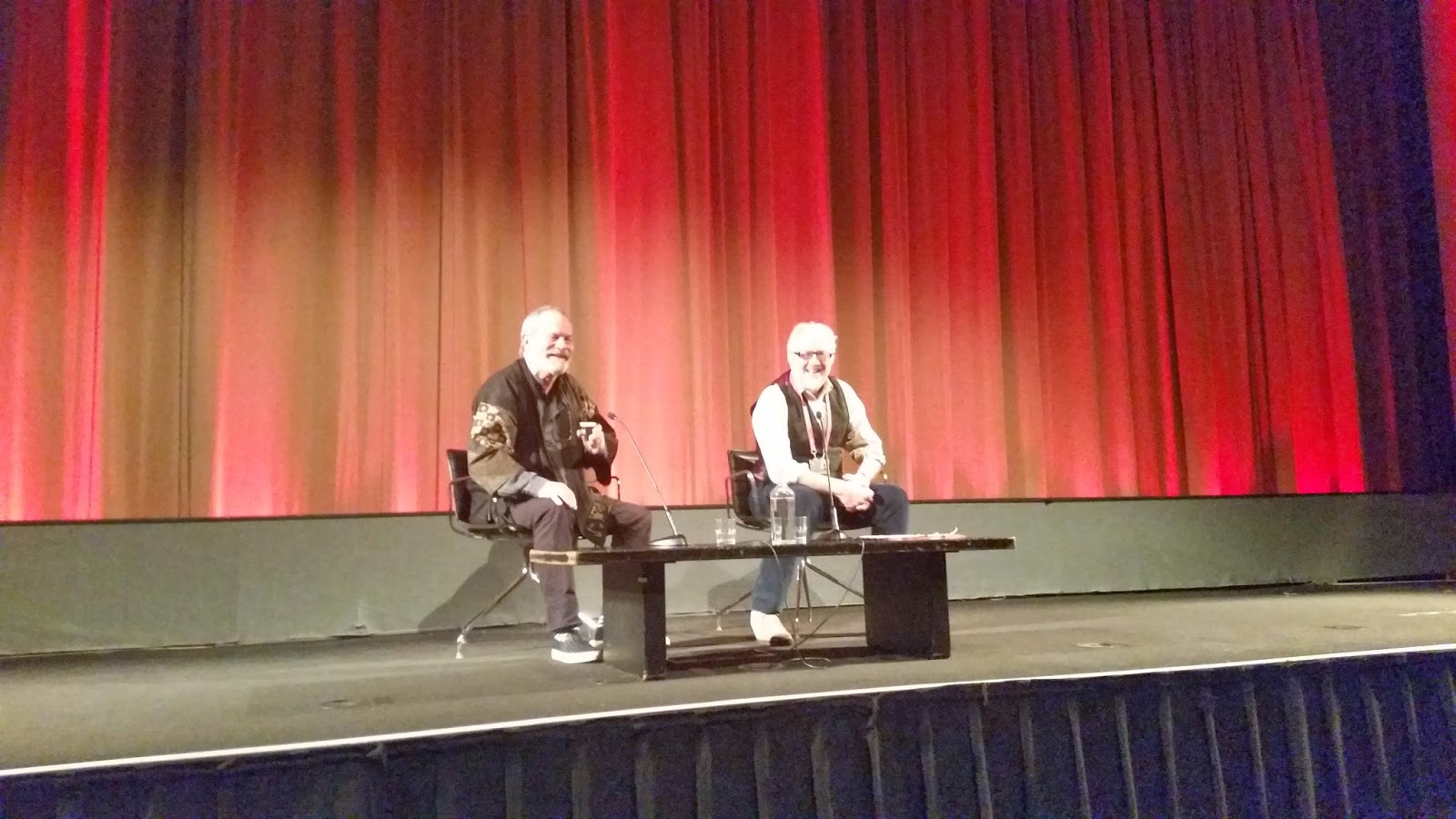 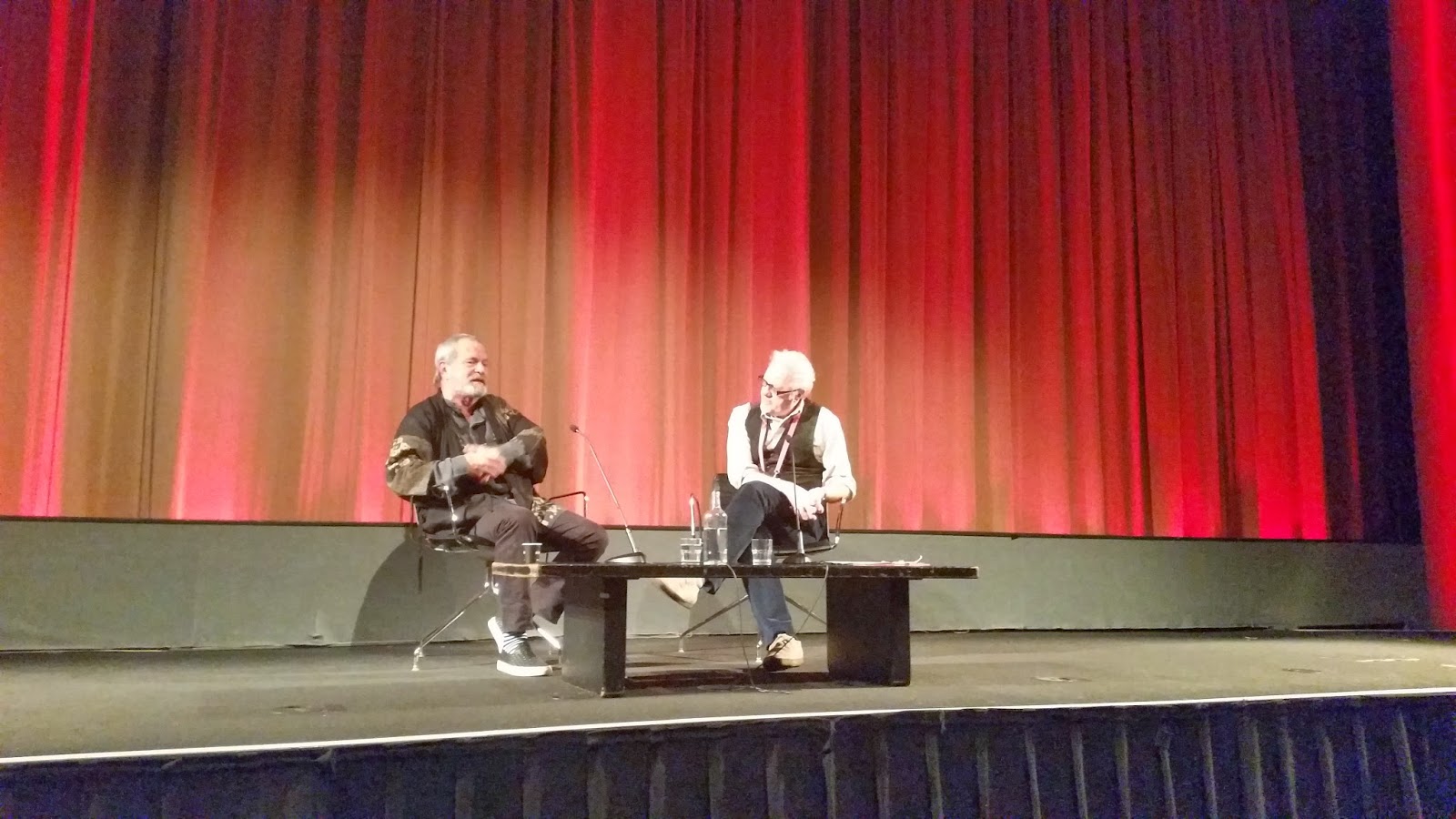 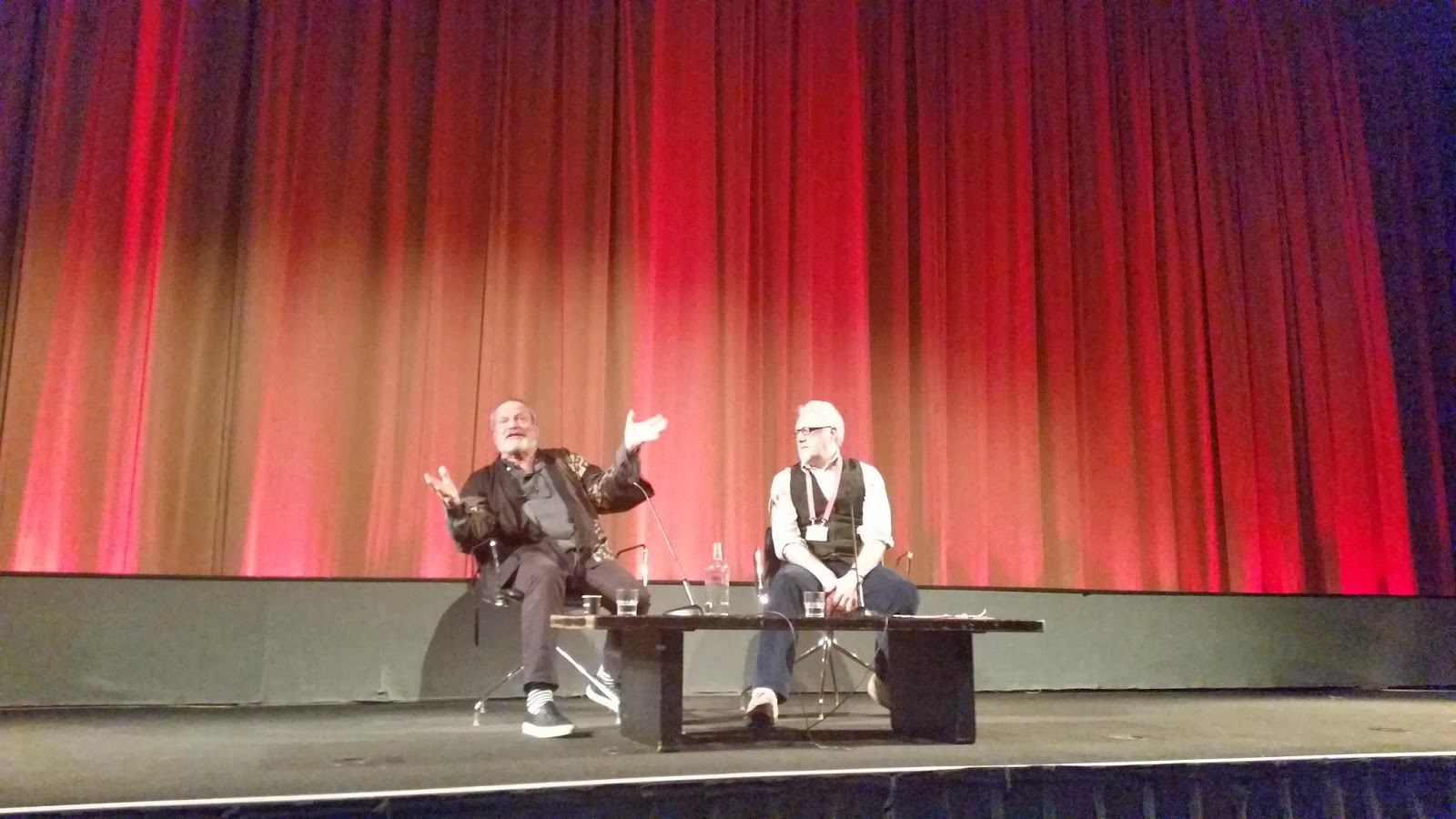 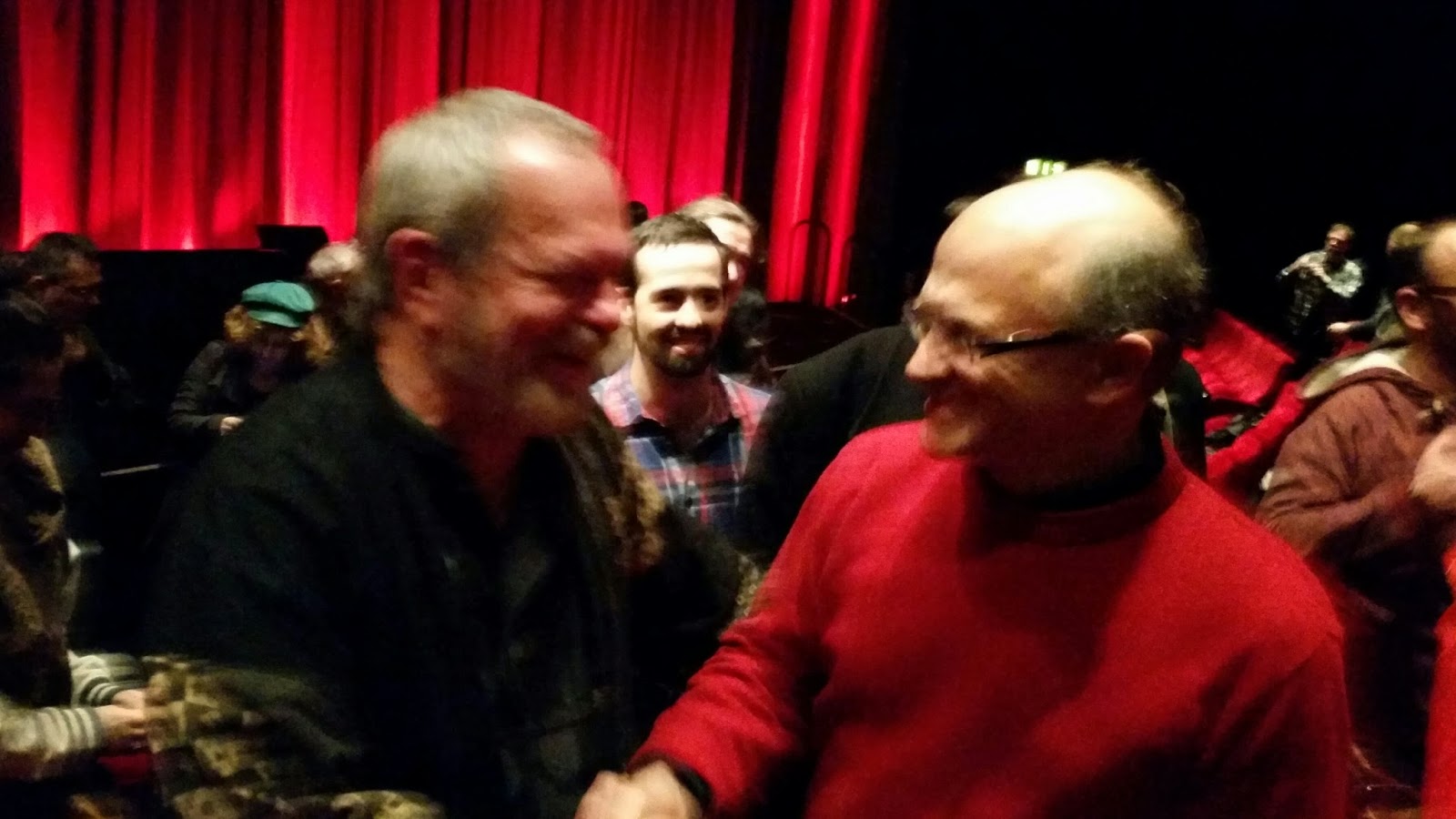 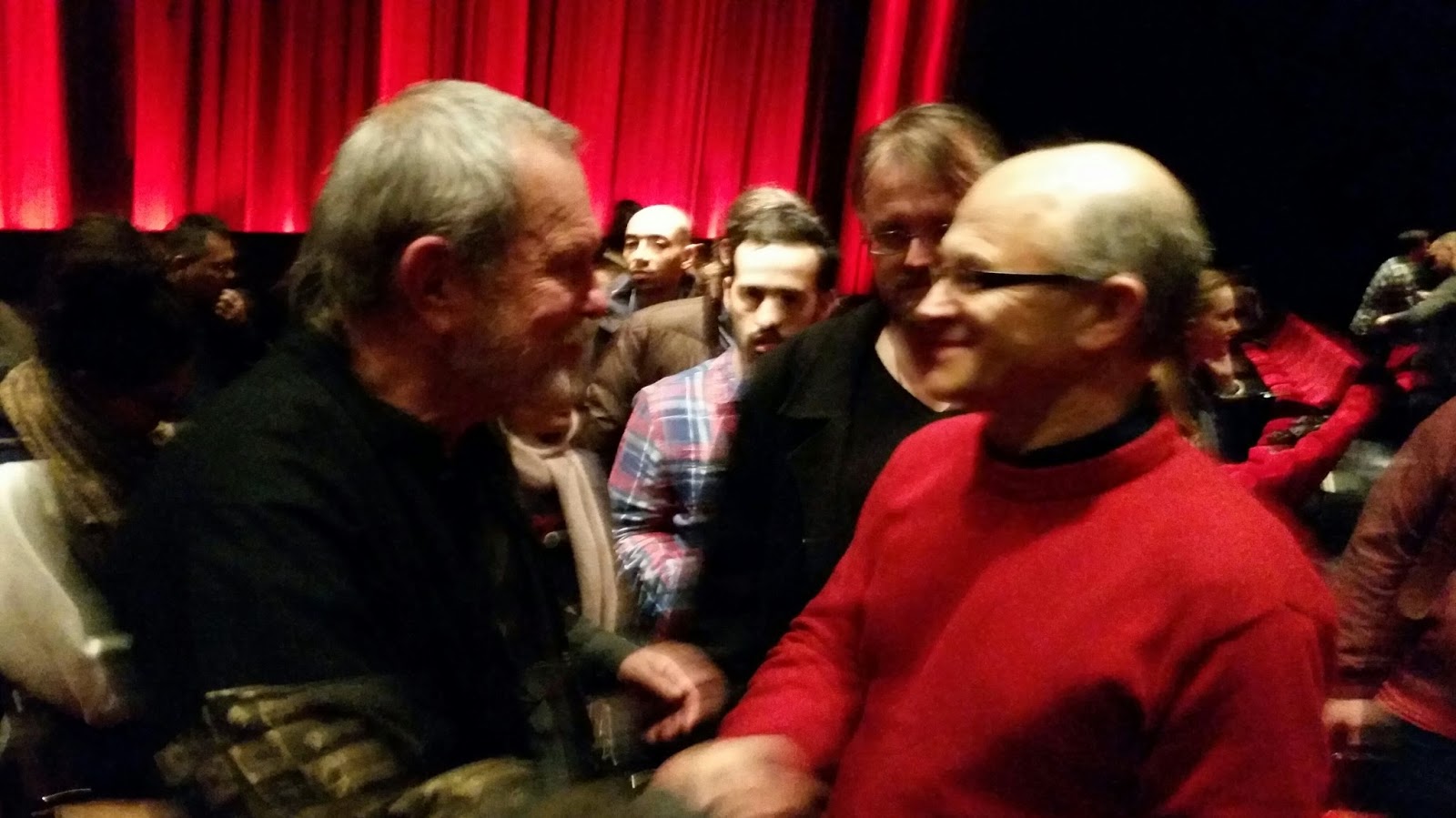 Posted by johnalexwood at 09:59 No comments: