My Monty Python Proposal: I proposed to Gemma in front of Michael Palin and Terry Gilliam!

This happened during the VIP after party of AN ENGLISHMAN, AN AMERICAN & AN INDIAN WALK INTO A BAR on Sunday 5th Feb 2017 at The Roundhouse, London. The event was a fundraiser for the venue, where Sanjeev Bhaskar was interviewing Michael Palin and Terry Gilliam about their careers in a "bar" on stage that came complete with an actual barman.

But my proposal nearly didn't happen! Gemma and I are with each other pretty much 24/7 so it was tricky having to call The Roundhouse to try and plan my proposal moment. There were weeks of secretly calling them whenever Gemma left the office.

I was asked not to propose during the performance, but it was OK to do it during the VIP after party (for which I paid £500 each for tickets!) But when the after party arrived, I was getting no help from anybody! What I wanted was for someone to take control of the situation for me; to tell Michael and Terry to stand next to each other, and the rest of the VIP guests to gather round in preparation for me going down on one knee. 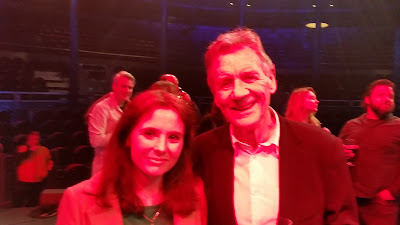 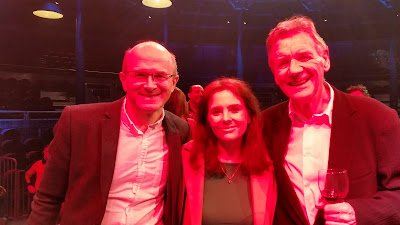 But when I asked someone to help me with that, they said: "We did ask you not to do the proposal!" I was so flustered, I didn't have the wherewithal to point out that I was actually given the OK to do it during after party. This once-in-a-lifetime opportunity was slipping through my fingers!

So I thought maybe Sanjeev could help me, but while asking his help (while somehow managing to get Gemma out of earshot), a fan would interrupt wanting a selfie.


Then I tried Terry, sort of whispering to him about my problem with my back to Gemma. He almost said: "OK, we can do your proposal to Gemma now," in a loud voice. I had to shut him up! But at least he'd been primed. Then, on cue, a fan interrupted wanting a selfie.

But finally, as people were starting to leave, and started to get the idea that it was never going to happen, across the other side of the stage, I noticed that Palin and Gilliam were standing next to each other. So I went up to Gilliam and said: "Can I do it now?" And he said, "OK", then turned to Palin to explain what was just about to happen.

Then, highly relieved, I commanded Gemma to put her phone on Photos, to her surprise and told me to give me her phone. I then gave the phone to whoever happened to be standing next to Gemma, and told him: "You're doing the photos". Neither Gemma or the person now holding Gemma's phone knew what the hell was going on.

Then I put my phone on Video and gave it to the first person I saw and said: "You're doing the video." he also had no idea what I was talking about, but everyone could see something out-of-the-ordinary was about to happen. Because I couldn't say what I was about to do as it would have ruined the surprise, he started videoing me in landscape, not knowing I was going to kneel down half way through. So, in the same take, he rotates the phone 90˚ when I kneel down!

With everything finally in place, with it so nearly not happening at all, I get down on one knee and pop the question, in front of two of my idols. I don't think any Python fan has ever proposed in front of them before. A first! On saying goodbye, Michael Palin wished us a long and happy life together.

The proposal received a lot of media coverage!


As if the proposal wasn't enough, that night we also met Roger Taylor, Malcolm Dixon who appeared in "Time Bandits", Terry Gilliam's wife, Maggie Weston, son, Harry Gilliam and daughter, Holly Gilliam who appeared in Brazil as a little girl. I finally got her to sign my "Battle of Brazil" book. It was one hell of a night!


Posted by johnalexwood at 13:17 No comments:

An Englishman, An American and an Indian Walk Into A Bar... 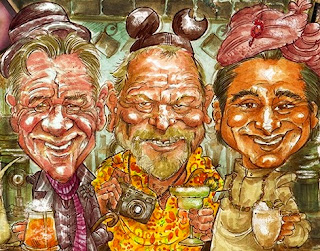 
Fellow Monty Python members Terry Gilliam and Michael Palin come together, for one night only to talk about their life and work in a one-off fundraising event for the Roundhouse hosted by Sanjeev Bhaskar.

An unforgettable evening of storytelling, improvised skits, hilarity and possibly the trio’s own take on some iconic British gameshows.

The night, is in celebration of our 50th anniversary as an arts centre and 10th year since reopening as a charity. All proceeds from the event will go towards the Roundhouse’s work with young people. Each year thousands of 11-25 year-olds have the chance to develop their skills and confidence through creativity – in music, media or performing arts projects at the Roundhouse.

Creativity inspires young people to reach further, dream bigger, and achieve more. Especially those from backgrounds that can feel limiting – or even hopeless.

Labels: #montypython, michael palin, monty python, sanjeev baskar, terry gilliam
Newer Posts Older Posts Home
Subscribe to: Posts (Atom)
Love Alter Bridge, Nicky Hopkins, Spamalot, Terry Gilliam's "Brazil", Monty Python and I am BFI's Biggest Monty Python Fan. My stepfather invented the Kenwood Chef, my father liberated Bergen-Belsen Concentration Camp and my godfather was Jagaddipendra Narayan, the Maharajah of Cooch Behar. Went to Cranleigh School and the University of Surrey. Scientologist. Vegan. East Grinstead. This blog is about all of the above and more, but not necessarily in that order.