Spamalot London Closes - it's the end of an era 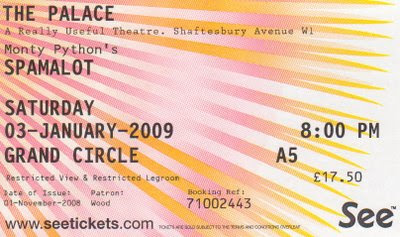 I went to see Spamalot (with Harry) for the 6th and last time ever because, sadly, it was Spamalot London's final performance.

I said hello to Sanjeev Bhaskar's wife, Meera Syal, by the stage door just before we went in to see Nina Söderquist who had invited us into her dressing room (which was like Grand central Station) just before the show so we could say goodbye. She is going back to Sweden today!

Then the final performance started before a packed house; couldn't see a spare seat anywhere. It was difficult to believe, as each hilarious scene rushed by, that it was the last time I would ever see them performed, from my favourite seat in the Upper Circle (the best seats in the house in terms of view but certainly not comfort!)

Sanjeev was the 4th King Arthur I had seen play the part (after Simon Russell Beale, Peter Davison and Alan Dale) and it was very interesting to see how each actor had interpreted the role. I found Sanjeev's ad libs such as saying 'Britons' in an Indian accent particularly funny as was his expression after Patsy's line "It's not the sort of thing you say to a heavily armed Christian."

However, I have to hand it to Simon Russell Beale, my first King Arthur, who I feel captured exactly the right frailty, regalness (or is it regality?) and incompetence of the 'real' King Arthur. He had a great singing voice too, and he had the timing of the lines just right. Well he is a BAFTA award-winning actor and he has been described as the greatest stage actor of his generation, so that's as you would expect I suppose - no offence to the other King Arthurs, mind.

I've never been to an end of show performance before, so I don't know if what happened last night was the norm, but Sanjeev made a touching speech at the end of the show (just before the final 'Always Look on the Bright Side of Life'). He thanked all the present and past cast, present and past audiences and he asked all the crew to come on stage - that's the lighting, costume, make up, wigs people etc. He also said that we should study our programmes and make a mental note of the cast because they are special, and to follow and support the careers of all of them. What a lovely thing to say! I second that totally; what a professional bunch of people the cast of Spamalot were!

It was clear that there was a lot of affinity between all the cast, that everyone had a lot of fun being in the show and that the after-show party was going to be full of some very emotional goodbyes.

In the heat of the moment, Sanjeev forgot to acknowledge two people, without whom there would have been no Spamalot in the first place. So let me do that for him now: Thank you to Eric Idle and John du Prez for creating a brilliant and extremely special experience for all concerned (especially me!) 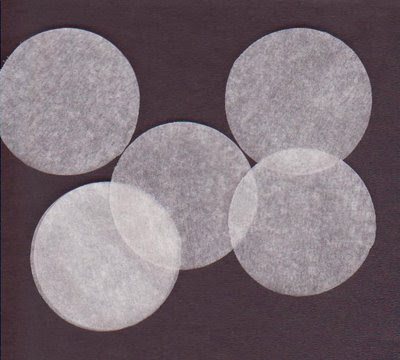 I hear the cow, a Knight of Ni! costume as well as the huge Holy Grail display from the front of the Palace Theatre were sold on eBay. The best I could manage as a souvenir was a few bits of confetti from the final final wedding scene.
Posted by johnalexwood at 10:38