The State of Israel was established in 1948
60 years ago
In spite of the efforts of many world leaders,
in spite of many peace plans,
a permanent solution to the Middle East Problem
seems as far away as ever.
May 2008 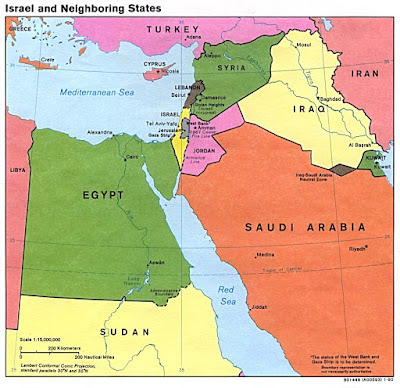 Map thanks to the Perry-Castañeda Library, University of Texas

There are, in fact, two separate problems;
THE PALESTINIAN PEOPLE AND THE LOSS OF THEIR HOMELAND Israel occupies the territory of what used to be Palestine. Living In that territory there are some 1.800,000 Palestinian Arabs. In the countries surrounding Israel there are some 4,500,000 Palestinians, mostly in Refugee Camps. A 2005 census showed the number of refugees by country as:
All Palestinians, those living in Israel as well as those living in the surrounding countries, want their former homeland, the country of Palestine, to be reinstated and they want to be governed by a Palestinian government.

There are some 5,500,000 Jewish Israelis in Israel. Virtually all were born in Israel or arrived there as children. They regard the territory of Israel as their homeland.

For many centuries, and until the establishment of the State of Israel in 1948, Palestine had been the homeland of the Palestinian Arabs and part of the Nation of Islam. By 1947 some 630,000 Jewish survivors of the holocaust had arrived and were physically in Palestine. The British, who held a mandate to maintain law and order in Palestine, were under attack by Jewish militants and gave notice that they would no longer accept that responsibility, that they were handing over that responsibility to the newly formed United Nations “forthwith”.

The UN faced a difficult situation; the Jewish settlers demanded independence and the British were leaving. The UN declared a “Palestine Partition Plan”. There was to be an independent “State of Israel” with borders within the country of Palestine. Israel was to occupy about two-thirds of the territory of Palestine while an “Arab Palestine” occupied the remainder. The city of Jerusalem was to be under International control.

The partition of Palestine in this way was opposed by the Arab and Muslim leaders of the time. From then until now, the Islamic world has never recognized the State of Israel, nor it’s right to exist.

As at 2007, in Israel and the “occupied territories” (areas of the original Palestine not specified as Israeli territory by the UN, plus the Golan Heights, a part of Syria) there were some 5,500,000 Israeli Jewish, ”infidels”. Accordingly, a state of holy war (jihad) exists between Islam and the Jewish infidels occupying Palestine. Islam’s front line soldiers (the Hezbollah in Lebanon, the Hamas in Gaza, and others) are trying in every way open to them to destroy Israel, and presumably will fight to do so for the foreseeable future.

Over the 60 years of Israel’s existence, there have been many peace plans. Here are some of them :

None of these plans has succeeded in bringing about a solution.

A “two-state solution” to solve the Israel-Palestine conflict envisions two separate states existing side by side in the historic region of Palestine, one Jewish and the other Arab. All the existing Arab inhabitants would be given citizenship by the new Palestinian state; Palestinian refugees would be offered such citizenship as well. Arab citizens of present-day Israel would have the choice of staying with Israel, or becoming citizens of the new Palestine.

The first “two-state solution” was the basis of the original UN Partition of Palestine Resolution of 1948 which established the State of Israel. This partition resolution was never implemented.
A "two-state solution" is currently under discussion by the key parties to the conflict, most recently at the Annapolis Conference in November 2007.

The stumbling block of a “two-state solution” always was, and still is, that neither the Israelis nor the Palestinians can agree on the border line between the two states. There is also the problem of the city of Jerusalem that both sides demand as their own Capital City. In any case, Islamic leaders will not, under any circumstances, accept the presence of a Jewish state on any part of what they regard as the soil of Islam.
ISSUES RELEVANT TO THE PROBLEM

There are several issues that have a relevance to the Middle-East Problem. Here are three.

History shows us that military occupation and civilian settlement of a territory populated by an indigenous people (as has happened in Palestine) eventually fails. It is possible that the same fate will befall Israel.
It is an acknowledged fact that, without the financial and military support of the USA and the financial support of the Jewish community of the USA, the State of Israel could (almost certainly) not exist. Moreover, back in 1948, without that support, the State of Israel would (probably) never have been established. At some time in the future, will that support be weakened or even removed?

The Middle East Conflict presents serious potential dangers to the rest of the world. The fact that the UN and its member countries recognize the State of Israel seemingly incites ‘militant’ Muslims to carry out murderous attacks world-wide. If Iran or Syria should ever develop a nuclear weapon facility, few doubt that they would use such weapons to destroy Israel. That could well result in the whole world being drawn into a catastrophic new world war.

In spite of the efforts of many world leaders, and in spite of many peace plans, a permanent solution to the Middle-East Problem seems as far away as ever.

The most likely scenario, at least in the short and medium term, is that there will be no ‘breakthrough’ and that the present confrontational situation will continue. Hopefully, the possibility of the conflict developing into an international war will be averted.

Another scenario is that, over the next two or three decades, the financial support from future USA governments will decline or be cut off. It is possible that the UN, which established the State of Israel originally, could “in the interests of world peace” decide to disestablish the state and to reinstate the country of Palestine under an Arab Palestinian government. In that event substantial numbers of Israeli Jews might lose their resolve to fight on and may choose to emigrate. Others will come to accept the reunification of Palestine and stay on as Palestinian citizens.
There are precedents. The Union of South Africa was occupied and governed by white Europeans until 1994 when white rule ended and a largely black government took power. Some white South Africans emigrated, some stayed on and accepted the new mostly black regime. There was a similar situation with British Hong Kong -- after 100 years of British control, Hong Kong was handed over to Chinese rule. Some Hong Kong citizens left the territory, the great majority stayed on.
Posted by Gemma Harris at 14:17