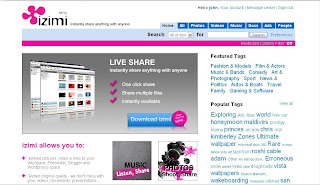 izimi, the exciting and innovative new web application plus social networking site (www.izimi.com) that allows you to instantly share anything with anyone, has just been upgraded - big time - in response to users' requests.

When you share a file on your PC (that's ANY file, no matter the size or type), it is given a URL and so becomes instantly accessible by anyone on the internet with a browser. With the new version, you now have the choice to share it publicly (the file is posted onto izimi.com where it is imediately searchable from within the site) or privately (the file is not posted onto izimi.com). In both cases, the URL generated by the application for that file can be sent in e-mails or via your IM (instant messaging). Here's an example of a publicly shared file: http://david.izimi.com/A22188E/CIMG0548.jpg and here's an example of a privately shared file: only kidding! You can also change the status of any file from public to private (or vice-versa) at any time with a single click.

The ability to create instant galleries is a completely new feature (and is my personal favourite). I would hazard a guess, since izimi = no uploading, that there's no faster way anywhere on the internet to make 100 pictures available for all the world to see. It's as simple as: Select 'New Gallery', select your 100 photos, type name of gallery - DONE! That's 4 clicks and one gallery name - it's that fast. The gallery then has its own URL which can also be e-mailed or IM'ed. Here's an example of a gallery: http://marc.izimi.com/gallery/random

Two other cool new features:
Even more enhancements are being developed as we speak for the next version, so stay tuned to izimi.com.