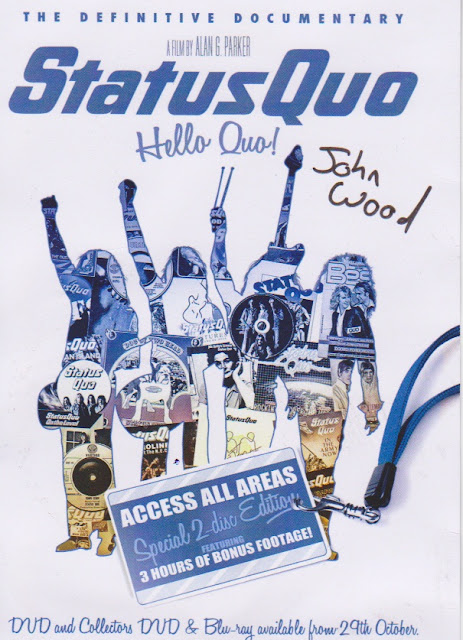 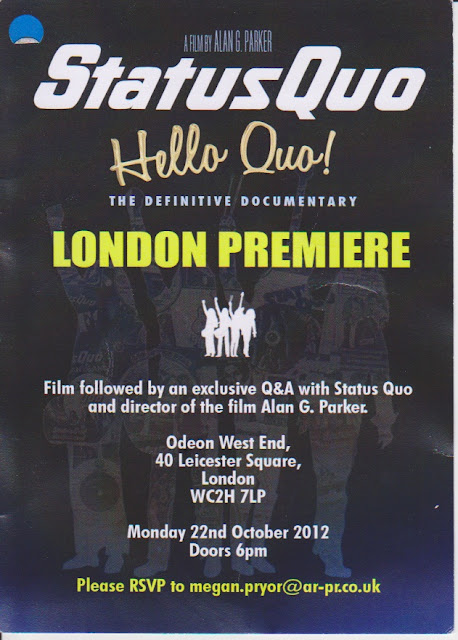 The panel, from left to right: Matt Letley, John Edwards, Andy Bown, Francis Rossi, Rick Parfitt and Alan G Parker. The MC (in the way most of the time) was Paul Gambaccini

Monday 22 October 2012: Status Quo were a major part of my school days, and they were the first band I ever saw live (Hammersmith Odeon, 1976). I was SO into Quo! So it was quite an experience for me to not only relive the past when watching Hello Quo!, directed by Alan G Parker, but also to be sitting right in front of the band for the Q and A session after the screening. I happened to be in the front row.

I managed to get a photo with the original drummer, John Coghlan, and the original roadie, tour manager and harmonica player, Bob Young. I also had a chat with Francis Rossi's son.

Thank you to Margarita Doyle, Hello Quo!'s line producer for telling me about this invitation-only event, and thank you to Justin Weyers (who created the film's animated intro sequence and links) who managed to get me in! Justin happened to see one of my tweets saying that I was hoping to go to the event; he had a spare ticket so he very kindly asked me if I wanted it! So I'd also like to thank Twitter!
Posted by johnalexwood at 09:51