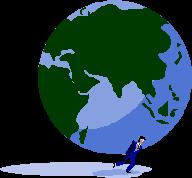 If Atlas, who in Greek mythology carries the weight of the world on his shoulders, was asked, "What are the world's weightiest problems today?" his answer would probably include:

NEEDS OF THE POPULATION EXPLOSION
The world population is set to increase by some 50% or another 3,000 Million people in the next 50 years. All these extra people will need food, water, housing, clothing, health care, education and the other necessities of life, and, of course, jobs.

WATER SHORTAGE
Already acute in some parts of the world - the increase in population will greatly increase this problem. Water shortage can lead to conflict and even war.

POWER SUPPLY
Raising the living standards of the developing world and at the same time the increase in the world's population will consume a vastly increased amount of power. One estimate is that the power required by the end of the century will be at least five times the present level.

THE END OF OIL AND GAS
The world's need for energy is increasing while the reserves of oil and gas are rapidly running out. As evidence, the prices of oil and gas have doubled in recent years. Supplies must eventually be exhausted, what then?

RISING SEA LEVEL
Due to global warming and melting ice, the sea level is predicted to rise by up to one meter by the end of the century. If so, this will inundate some of the most densely populated cities and areas in the world. Hundreds of millions of people now in those cities and areas will gradually re-locate in other, higher, areas.

CONSEQUENCES OF A CHANGE IN CLIMATE
Climate change will cause major changes in the amount and location of rainfall. Some parts of the
world will become virtually uninhabitable. The existing population in those will over time re-locate in other areas, and add to those migrating due to the rising sea level.

POVERTY
Some 40%, or 2,700 Million, of the world's population are currently having to live on less than US$2 (£1) a day. Some 800 Million go to bed hungry every night. Over 2,000 Million people have no access to electricity. Poverty shortens life, causes disease, increases infant mortality,
leads to mass economic migration, more "illegal immigrants".

AIDS
This pandemic, first recognized in 1981, had by 2006 caused the death of some 25 million people. It is estimated that today some 39 million people are infected, of these. nearly 600,000 are children. Although there are treatments (for those that can afford them) which prolong life, there is no known cure.

WARFARE
According to Wikipedia, there are currently 27 wars taking place around the world.

What are the world's governments and commercial and industrial corporations doing to tackle these global problems? From what I can discover, with one exception, not much!

There has been a marked recent interest in the field of REDUCING CARBON DIOXIDE EMISSIONS. In my opinion, the measures being initiated are futile; they will inevitably fail to result in any significant reduction in the world's increasing CO2 emissions. Moreover, if the measures being planned are actually enforced there is a very real danger of their causing a world-wide economic recession. We are, in my opinion, going in the wrong direction!

In my opinion again, the solution to this CO2 emission problem lies in the harnessing of the inexhaustible supply of heat below the earth's surface, GEOTHERMAL ENERGY, leading eventually to the complete elimination of the use of fossil fuels. Moreover this pollution-free, universally available, unlimited energy source would enable cheap and abundant electrical power to be available world-wide; this would go a long way towards solving, or at least adapting to, most of the world's problems.

If the global resources expended in the last two decades on wind farms, solar panels and on new wells to mine oil and gas from less and less productive areas had instead been used to develop geothermal heat as an energy source, we would be well on the way to a permanent and ideal solution to the world's energy source needs for the foreseeable future.

Note This subject is discussed in other papers: 'Energy' and 'Global Warming'.

The word geothermal comes from the Greek words "geo" (earth) and "therme" (heat), and means the heat of the earth. Earth's interior heat originated from its fiery consolidation from dust and gas over 4 billion years ago and is continually regenerated from the decay of radioactive elements that occur in all rocks.

It is almost 6,500 kilometres (4,000 miles) from the surface to the centre of the Earth, and the deeper you go, the hotter it gets.

The outer layer, the crust, is three to 35 miles thick and insulates us from the hot interior. From the surface down through the crust the normal temperature gradient (the increase of temperature with the increase of depth) in the Earth's crust is 17 - 30°C per kilometre of depth (50-87°F per mile). Below the crust is the mantle, made of highly viscous, partially molten rock with temperatures between 650 and 1,250°C (1,200-2,280°F). At Earth's core, which consists of a liquid outer core and a solid inner core, temperatures may reach 4,000-7,000°C (7,200 to 12,600°F). Where magma reaches the surface it can build volcanoes. But most magma stays well below ground, creating huge subterranean regions of hot rock sometimes underlying areas as large as an entire mountain range. Cooling can take from 5,000 to more than 1 million years. These shallow regions of relatively elevated crustal heat have high temperature gradients.

Production from individual geothermal fields can be sustained for decades and perhaps centuries. The U.S. Department of Energy classifies geothermal energy as renewable.

The drill rigs and drilling technology and equipment are virtually the same as that used for drilling for oil or gas. The electrical generating plant, located alongside the geothermal well heads, is standard; steam turbine driven electrical generators connected to the grid. Water consumption is small as the steam is condensed and re-used as injection water.

PROTECTION OF THE ENVIRONMENT

No power plant or drill rig is as lovely as a natural landscape, so smaller is better. A geothermal plant sits right on top of its fuel source: no additional land is needed such as for mining coal or for transporting oil or gas. When geothermal power plants and drill rigs are located in scenic areas, mitigation measures are implemented to reduce intrusion on the visual landscape. Some geothermal power plants use special air cooling technology which eliminates even the plumes of water vapour from cooling towers and reduces a plant profile to as little as 24 feet in height.

Since the 1970's the geothermal industry, with the assistance of government research funding, has overcome many technical drilling and power plant problems. As a result of government-assisted research and industry experience, the cost of generating geothermal power has decreased by 25% over the past two decades. Research is currently underway to further improve exploration, drilling, reservoir, power plant and environmental technologies. Enhancing the recoverability of Earth's heat is an important area of ongoing research.

Private and government research projects in the United States, Japan and in Europe are improving the accessibility of geothermal energy by developing new technology to increase the permeability of the rocks.

Permeability can be created in hot rocks by hydraulic fracturing -- injecting large volumes of water into a well at a pressure high enough to break the rocks. The artificial fracture system is mapped by seismic methods as it forms, and a second well is drilled to intersect the fracture system. Cold water can then be pumped down one well and hot water taken from the second well for use in a geothermal plant. This "hot dry rock" technology is being tested in Japan, Germany, France, England and the U.S. In Australia a test plant has been in operation for some time yielding excellent results.

THE FUTURE FOR GEOTHERMAL ENERGY

The outlook for geothermal energy use depends on at least three factors: the demand for energy in general; the inventory of available geothermal resources; and the competitive position of geothermal among other energy sources. The Demand for energy will continue to grow. Economies are expanding, populations are increasing (over 2 billion people still do not have electricity), and energy-intensive technologies are spreading. All these mean greater demand for energy. At the same time, there is growing global recognition of the environmental impacts of energy production and use from fossil fuel and nuclear resources. Public polls repeatedly show that most people prefer a policy of support for renewable energy.

Shorter and Longer Term Costs. Production of fossil fuels (oil, natural gas and coal) are a relative bargain in the short term. Like many renewable resources, geothermal resources need relatively high initial investments to access the heat. But the geothermal "fuel" cost is predictable and stable. Fossil fuel supplies will increase in cost as reserves are exhausted. Fossil fuel supplies can be interrupted by political disputes abroad.

Direct and Indirect Costs. The monetary price we pay to our natural gas and electricity suppliers, and at the gas pump, is our direct cost for the energy we use. But the use of energy also has indirect or external costs that are imposed on society.

Examples are the huge costs of global climate change; the health effects from ground level pollution of the air; future effects of pollution of water and land; military expenditures to protect petroleum sources and supply routes; and costs of safely storing radioactive waste for generations. Geothermal energy can already compete with the direct costs of conventional fuels in some locations and is a clean, indigenous, renewable resource without hidden external costs. Public polls reveal that customers are willing to pay a little more for energy from renewable resources such as geothermal energy.

Domestic and Importing Costs. Investment in the use of domestic, indigenous, renewable energy resources like geothermal energy provides jobs, expands the regional and national economies, and avoids the export of money to import fuels.

Energy demand is increasing rapidly worldwide. Some energy and environmental experts predict that the growth of electricity production and direct uses of geothermal energy will be revitalized by international commitments to reduce carbon dioxide emissions to avert global climate change.
Posted by Gemma Harris at 13:49