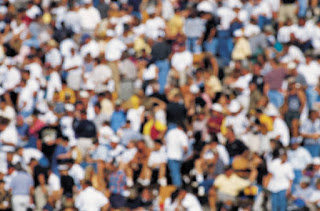 The predicted population levels to the end of this century are:

By 2050 (when my grandsons will still only be in their early 50s!) the World population is predicted to reach 9,400 million. That is an increase from its 2006 level by some EIGHT TIMES the population of the USA today.

To compare the current growth rate of 75 million a year:

(Note -- in contrast, due to the ever-mounting toll of AIDS, in some sub-Saharan countries the average life expectancy and the total population is currently reducing.)

The birth rate, and therefore the rate of increase in the numbers of non-Westerners, is much greater than of the Westerners.

By 2050 there will only 1 Westerner to nearly 7 non-Westerners.

Simultaneously with the increase in the total World's population, the proportion of old people within the total is increasing. This is true of virtually every country, Western and non-Western alike.

One consequence of this will be the inevitable raising of the age of retirement and the age of the commencement for drawing pensions. This is already being proposed or being put into effect in several Western countries.

Because of the increasing proportion of 'non-whites' to 'whites', it seems inevitable that the numbers of the 'ethnic minorities' immigrating to Western countries will continue to increase. 70 years ago, before the start of WWII, the proportion of 'non- whites' resident in Western countries was comparatively small (except for the several million of 'Afro-Americans' in the USA). Today every Western country has a major immigration and an 'ethnic minority' problem. For example: in the UK the non-white population increased from about 3 Million in 1991 to about 6 Million in 2006, doubled 15 years, and now represents about 10% the total UK population. The non-white population in the USA is currently about 33% and is forecast to reach 50% by 2040 -- most of the increase being 'Latinos' from Central and South America.

Demographic experts forecast that by 2050 the population of the World will have increased by nearly 50% -- from 6,530 million today to some 9,500 million by 2050. This predicted number is an extrapolation based on the statistics of the present and recent past growth. The obvious question arises: can the World's resources meet the needs of the existing population plus the predicted additional nearly 50% over the period to 2050?

A resource which will present a major problem is water. Even now in parts of the Middle East and Central Africa there is a chronic shortage of water for human consumption, agriculture and livestock. Even now, World-wide, river levels are falling, lakes are drying up, and the water levels of underground aquifers and wells are dropping. During the last century substantial once fertile areas of Southern USA, Australia and Africa have become barren, and this 'desertization' process is increasing.

There is a solution to the supply of water: de-salinating sea water. De-salination plants are already installed and working in about 100 countries. De-salination plants consume a great deal of electricity and therefore incur the burning of a correspondingly large quantity of fossil fuels and/or nuclear power. Research at Milos, Greece, and several other sites around the World is currently being conducted into the feasibility of de-salination plants employing only on-site geothermal energy. The results are encouraging and such plants may well be the solution of the water supply problem.

The other vital resource which could be a major problem is the provision of sufficient energy: electrical power, fuel for vehicles, shipping and aircraft, and for commercial and domestic heating. Except for the relatively small input from wind turbines, hydro-electric generators and solar panels, the energy we consume is produced by burning fossil fuels (coal, oil, natural gas) and from the uranium consumed by nuclear power plants. The reserves of oil and gas are being rapidly exhausted. For example, many oil fields in USA have been pumped dry and the North Sea oil fields have passed their peak. There is still plenty of coal to be mined in some parts of the World but coal burning releases vast amounts of CO2 and other harmful emissions into the atmosphere and that (probably) accelerates global warming. Uranium, a rare metal, is already in short supply, and the use of nuclear power adds to the as yet unsolved problem of the safe disposal of nuclear waste.

There is an alternative solution to the World's ever increasing need for power: geothermal energy -- harnessing the heat available in inexhaustible quantities below the surface of the earth. Over the coming decades, geothermal energy could be brought into general use to supply all the power the increasing population will need, cheaply, cleanly and pollution-free. (See my paper on Energy). Unfortunately no country (except for Australia) is displaying serious interest in developing geothermal energy.

Given an adequate supply of water and energy, there should be no insurmountable problem in the provision of the needs of the existing and increasing population for the foreseeable future.


IS THERE A LIMIT TO POPULATION GROWTH?

In Nature, every form of life is 'wired' by Nature to expand its population until eventually it reaches a limit. The limit is usually due to scarcity of water and/or food, predators and disease. It seems that the human race is still expanding its population and has not yet reached Nature's limit.

The human race possesses a high degree of ingenuity: it seems possible and indeed likely that mankind's ingenuity will overcome the problems which will inevitably arise as the population increases over the next several decades. So will the human population increase 'for ever'? Common sense and the Laws of Nature indicate that there must be a limit somewhere; but what event or events will it be which brings us to our limit? And to what number will the population have grown when we reach that limit?

Some demographic experts think that the RATE of human population growth has already peaked and that from now it will decrease. The factors which they think will bring this about this result are these.

1) Much of the World's population increase explosion over the last century has been due to the dramatic increase in the average age, to people living many years longer than in previous centuries. For this reason, the future average age of the population will increase much less rapidly, resulting in there being little and eventually no increase in the overall population numbers from this source.

2) Over the last century, the birth rate of the indigenous people of most Western countries (the 'whites') has reduced as their standards of living have improved. The 'whites' birth rate is already at or near zero increase and in some countries it is in fact negative. The theory is that, as the standard of living of the people of the third World increases towards Western standards, their birth rate will likewise fall to zero increase.

Predictions are that by the year 2100 the rate of growth will have levelled off to zero and the World's population will have peaked at around 10,000 million. Some further predict that during the 22nd. century the human population number could start to decline.

Sources -- The Internet, National Geographic and other reference works
Posted by Gemma Harris at 21:53