SPAMALOT - I laughed SO much I had to go and change my armour! 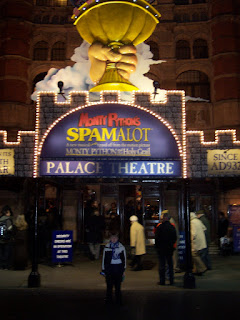 Having been a fan of Monty Python and the Holy Grail ever since 1975, this sudden revival of interest - over 30 years later - is a strange experience for me. And to see performed, right in front of me, the very lines from the film that I was quoting at school all those years ago, was stranger still! (Quite why they changed the word 'filth' to 'mud' in the Sir Galahad's mother's line, "Dennis, there's some lovely filth down here" I'll never know. I think I'll write a letter).I saw the 8.00pm performance of Monty Python's Spamalot at the Palace Theatre, London, on Tues 23 Jan 07 with my son Harry, aged 10 (in top picture). I thought we were going to see Tim Curry in the lead role of King Arthur but found out that we'd just missed him and that Simon Russell Beale had taken over. I really enjoyed his interpretation of the part and it looked like he was having a ball too. 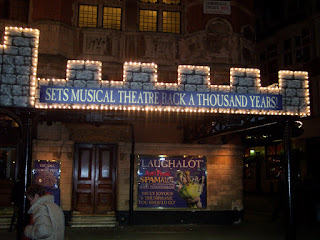 A pleasant outcome of the evening for me was the fact that I could now completely let go of the secret fear I had been harbouring - that no one but the Pythons themselves can do their stuff and make it funny; Simon Russell Beale, Hannah Waddingham (what a voice!), Tom Goodman-Hill (who plays the French Taunter, Knight of Ni and Tim the Enchanter - a very talented young actor who is bound to become a household name some day soon) et al put a refreshing new twist on old Python humour and made it something very special, and very funny.

Another pleasant development was the fact that Harry's interest in Monty Python has been piqued, which is not bad going. I didn't get what Python was all about until I was 13! 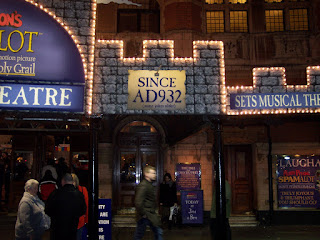 The songs (there seems to be SO many) were superb, particularly of course: The song that goes like this, plus the colourful costumes and all the knees-bent running about behaviour made the whole thing a riot! I laughed so much that it was actually difficult for me to see the stage, because of all the tears of laughter in my eyes throughout the show! 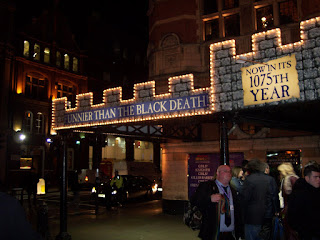 If you want a really good night out, Python fan or not, I urge you see Spamalot before it's too late (although, with the success it's enjoying, it's likely to be in the West End and everywhere else in the world where it is playing, for a long time to come yet).
Relevant sites:
www.montypythonsspamalot.com
www.pythonline.com
www.ericidle.com

If you liked this article, then I'm hoping you might want to contribute to this one:


List of things referred to in the works of Monty Python
Posted by johnalexwood at 00:17