An Evening Celebrating the Life of Gena Turgel, MBE 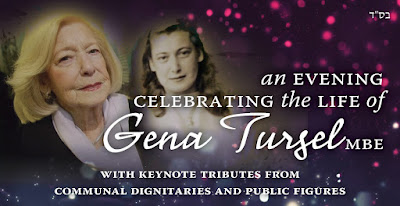 I was so pleased to be invited to this very special event, hosted by Holocaust Educational Trust in honour of Holocaust survivor, Gena Turgel, who sadly passed away last year.

My connection with her was via my late father, Belsen liberator, Leonard Berney. Gena was one of the thousands of prisoners at Bergen Belsen, and after liberation, my father was the Commander of the Belsen Camp for Displaced Persons. Another member of the liberating forces was Norman Turgel. He met Gena at Belsen and pretty much, there and then, decided he was going to marry her.

He wanted to hold an engagement party at the Displaced Persons camp, but in order to do that, he had to ask permission from my father.  Luckily, Dad said yes! This story, which includes a photo of myself with Gena, appeared in the Daily Mail in 2015 on the 70th anniversary of the liberation of Belsen.

I also had the pleasure of meeting Norman Turgel in Hyde Park in 1985 at an event celebrating the 40th anniversary of the liberation of Belsen. Norman told me he remembered my father from their time together at Belsen in 1945.

The evening, in the presence of many of Gena's family, celebrating her took place at the Arts Depot in North Finchley, London on 12th September 2019. It was a very moving, educational and inspirational, musical evening. Before the show, Gena's wedding dress, famously made out of an army parachute (now preserved at the Imperial War Museum), was on display. Here is a selection of my photos from the event: