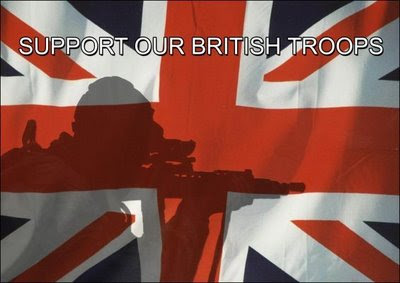 The role of the British (and every other Nation’s) Armed Forces is,
Currently, the British Armed Forces comprise 196,000 personnel. Of these some 30,000 are deployed overseas in the following 19 areas:

Afghanistan and Iraq In 2001 George Bush invaded and occupied these two countries and Tony Blair caused Britain to go to war against them too. This was contrary to the wishes of the great majority of the British people (witness the mass anti-war demonstrations). Eight years later, over 10,000 British forces are still there.

The British troops are in the main employed in defending themselves and, when they are not doing that, attempting to kill the “enemy”. The “enemy” are, in fact Afghan and Iraqi nationals attempting to drive foreign invading armies from their country – an aspiration with which I, personally, sympathise.

When in 2001 Britain invaded Afghanistan and Iraq, neither country posed any threat to Britain or to British interests. In my opinion, and in the opinion of the majority of British people, British forces should not have invaded those countries and should not be there now.

The Balkans, Cyprus, Ethiopia, Georgia, Sierra Leone, and Liberia The British troops perform a peace-keeping role in these six countries. In effect, their job is to prevent the citizens of these countries from killing each other. For example, incredibly, the British have maintained Military peacekeepers (and their families) in Cyprus for 34 years!

None of these countries form any sort of threat to Britain. In my opinion, British troops should not be there -- the citizens of those countries should be left to resolve their differences in their own way.

Belize, Brunei, Canada, Kenya, Oman, and Saudi Arabia There are, apparently, British forces stationed in these countries but, other than “training the local military” and “at the request of the current ruler” I am unable to discover exactly what they are doing there.

Whatever they are doing, clearly those countries are not any sort of threat to Britain and, as I see it, British forces have no justifiable business there and should return home.

Germany Since the end of World War II, the British Army and Air Force have maintained extensive facilities and personnel in Germany. In the “cold war” period, it was thought important for the British forces to be nearer to a possible West/Russia War zone. Now the reason is said to be that there are insufficient accommodation and training facilities in Britain to house them.

In 2007, there were some 23,000 British troops in Germany and another 32,000 people “associated with their presence” According to the BBC, the British presence contributes 1.5Billion Euros annually to the German economy.

In my opinion, an urgent investigation needs to be undertaken as to whether British Forces still need to remain in Germany.

Ascension Islands, Diego Garcia, Falkland Islands, and Gibraltar These are British Dependencies, some of the last remnants of the great British Empire. The British troops there form the British Garrison. It is questionable as to whether these four Dependencies should now be granted their independence and so allow their British garrisons to return to the UK.

What of the costs incurred by British Forces overseas?

The 2009 overall budget for the British Armed Forces is £43 Billion ($61 Billion). Britain spends more on its armed forces than any other country in Europe, although the population of Russia, France, Germany and Italy are all greater than that of the UK’s. About a half of the British £43 Billion expenditure will be taken up by the deployments in Iraq and Afghanistan.

In human costs, the deployments in Iraq and Afghanistan have cost the lives of some 300 British service personnel and several thousands others have been wounded. (Not to mention the hundreds of thousands of Iraqis and Afghans the British troops have killed or wounded, and the vast amount of infrastructure and property that has been destroyed.)

The overseas combat and peacekeeping roles being undertaken by the British Forces are in support of resolutions of the United Nations, NATO and the EU. Deploying troops in support of these resolutions is, however, voluntary; each member state decided whether or not to send its troops -- and if so, how many. For example:
SUMMARY

As I see it, Britain should use its armed forces strictly and only in the role that they are meant for, namely the protection of Britain from foreign attack, and for internal use as and when required.

I believe that British Armed Forces should NOT be deployed for combat and peacekeeping duties overseas. I believe that the 30,000 men and women currently serving outside of Britain and its Dependencies should be brought home forthwith.

Well, what it all boils down to is whether or not you get involved in other people’s problems. If you don’t want to see a repeat of the Bosnian conflict or some of the inter-tribal massacres in Africa then of course there is no need to have a peace-keeping force and no need for Britain to send its armed forces to participate.

I support Brits being part of all and any peacekeeping forces.

In my opinion, British Armed Forces should be deployed abroad only in defence of British interests. For example, I agree with their deployment when Argentina invaded the Falkland Islands, a British Dependency.

With the Gulf war you could argue (just about) that Britain’s interests were threatened – their ME oil interests, that is. Even so, in that war the Brits numbered 43,000 whereas the next European contributor was France with 18,000, next Italy with 1,200. Spain contributed Naval forces only, the other EU countries sent just a handful of troops.

I do not agree with the British invasion of Iraq or Afghanistan – those regimes presented no threat to Britain. Neither do I agree with Brits being deployed on peacekeeping missions around the world.

I am aware that the UN Security Council is empowered to call upon member states to provide military intervention for both peacekeeping and combat missions. However, I think the only nations that should provide troops are those whose security is directly threatened, that is from the states neighbouring the conflict only.

(As an aside. When Argentina invaded the Falklands, a clear case of aggression by one member state against another, the UN Security Council did not “call upon member states” to intervene against Argentina. Apart from calling for both sides to cease fire, the UN did nothing. Not one state provided military aid to Britain at that time of need! Britain had to go it alone.)

I admit to being somewhat biased. I can’t help (mentally) putting myself in the shoes of the Brits on overseas missions. I was in the British Army throughout WWII. Then, the army was doing what it had to do –defend the nation. We knew very well what we were there for -- if we lost the war, Britain would become a Nazi-occupied country, part of the Third Reich. But that is completely different to the situation of the Brits on missions now.

The men on overseas missions now are “in harm’s way” day and night. They are exposed to suicide bombers, snipers, car bombs and the like for months at a time. And why? I am sure the men in, for example, the Balkans, must ask,

“I joined the Army to defend my country, but I am out here, thousands of miles away from home. Every day I am sent out on patrol trying to stop the Muslims from blowing up the Christians, or the other way around. What I am doing here is nothing at all to do with defending the UK. Will somebody tell me, what the hell am I doing in this God-forsaken place?”

As I wrote before, I do believe that Britain’s Military combat troops and peacekeepers should be brought home forthwith. That includes the 8,300 combat troops in Afghanistan --that’s an un-winnable war anyway!

However, I believe that Humanitarian Aid is another matter. I do agree with the British government (i.e. the taxpayers) providing humanitarian aid in crisis situations overseas, whether the crisis is due to conflict or to natural disaster.